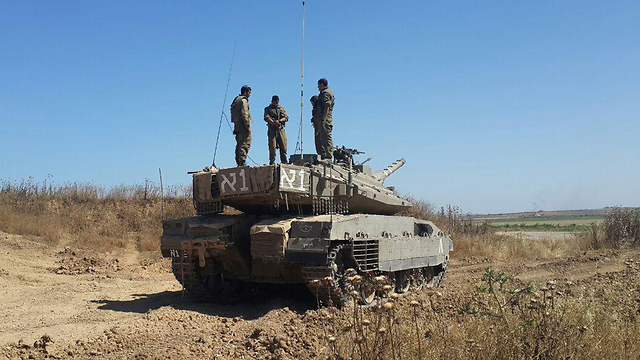 The day's events include a wreath-laying ceremony at Yad Vashem, reading victims' names in 'Unto Every Person There is a Name' ceremony in the Knesset, and the March of the Living in Poland, where over 10,000 youths will walk from Auschwitz to Birkenau.

The State of Israel marks Holocaust Remembrance Day on Thursday with ceremonies and events across the country, honoring the memory of six million Jews murdered by the Nazis.
The day's events began at 10am with two minutes of silence in memory of the six million, marked by a siren that was heard throughout the country and brought Israel to a standstill as drivers got out of their cars, soldiers climbed on top of their tanks, and pedestrians stopped in their tracks.

Soldiers on the Gaza border stand on their tanks during the 2-minute siren (Photo: Roee Idan)

Drivers stop their cars to the side of the road to stand during the 2-minute siren (Photo: Yaron Brener)

Schools and municipalities across the country are also holding their own memorial ceremonies starting at 10am to mark the day.

At 11am, the ceremony "Unto Every Person There is a Name" will be held both in Yad Vashem's Hall of Remembrance and at the Chagall State Hall at the Knesset under the auspices of the Knesset's Speaker. During the ceremony, names of the Holocaust's victims will be read out. Also in attendance will be President Rivlin and his wife, Prime Minister Netanyahu, Supreme Court President Naor, Opposition leader Isaac Herzog, and others.

Schedule of ceremonies of events to mark Holocaust Remembrance Day.
The main memorial ceremony will be held at Yad Vashem's Hall of Remembrance at 1pm.

At 5:30pm, a ceremony for youth movements will be held at Yad Vashem's Valley of the Communities. It will be attended by Education Minister Naftali Bennett and hundreds of members of the youth movements.

Yad Vashem Chairman Avner Shalev will speak at the ceremony, followed by Holocaust survivor Marion Miller. Yitzhak Reichenbaum, accompanied by youth movement participants, will light the Memorial Flame. The program will include a performance by Elai Botner and the Outsiders and the Youth Movement Choir led by Moshe Yosef.

The day's closing events will be held on 7:30pm at Kibbutz Yad Mordechai at the monument in memory of Mordechai Anielewicz, one of the leaders of the Warsaw Ghetto Uprising. Defense Minister Moshe Ya'alon, MK Yair Lapid and Eshkol Regional Council head Gadi Yarkoni will speak at the ceremony, which will also be attended by representatives from 17 foreign states.

Yad Vashem will also hold special "Behind the Scenes" tours for the public between 12pm-2:30pm, during which expert guides will unveil original documents, photographs and artifacts not on general display. These tours will be conducted predominantly in Hebrew. The only English-language lecture will be given on the topic "Making Memory Relevant: Explore & Discover Yad Vashem Online" by Dana Porath, Director of the Internet Department in the Yad Vashem Communications Division.