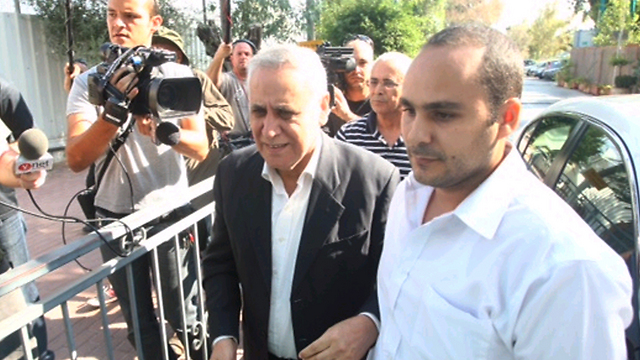 Katsav appeals to Rivlin: Let me live my shattered life in peace

Refraining from offering an apology, the former president asks President Reuven Rivlin for clemency on the grounds of severe mental anguish, as well as reasons of ‘charity, compassion and mercy’.

Former President Moshe Katsav who is serving a seven-year sentence for rape and other sex offences, wrote a letter to President Reuven Rivlin on Sunday requesting to be pardoned.

“I wish to remain hidden in my home and disappear from the collective consciousness to live the rest of my shattered life with my family,” Katsav wrote in his letter. This is the first time that Katsav himself has asked for a presidential pardon.

In his letter, Katsav details the severe mental state he has found himself in, particularly after his previous appeal to shorten his sentence by one third was denied by the parole board. Nevertheless, he is not claiming mental insanity, and his letter does not include a professional mental evaluation.

At no point in his letter did Katsav express remorse, nor does he apologize, but he does express sadness for anyone who was hurt by him. Despite this, Katsav wrote to Presient Rivlin, “I maintain my innocence.”

Women’s organizations and particularly Na’amat have expressed their objections to the appeal put forth by Katsav, who was convicted of rape. Na’amat Chairperson Galia Wallach pointed out Monday that Katsav’s letter only referred to the suffering experienced by him and his family, not his victims. “He hasn’t faced up to what he did,” said Wallach. “And he hasn't expressed remorse or apologized to the women he hurt.”

“He isn’t at all preoccupied with what he did to his victims,” said Wallach. “He doesn’t care that many of them still carry the damage they’ve suffered from this story with them. If he can still claim he is innocent and refuse to accept the police and court’s conclusions, the situation is truly bleak.”

Former President Moshe Katsav (center) re-entering Maasiyahu Prison (Photo: Motti Kimchi)
In his letter, Katsav also listed a series of arguments that have to do with his fall from grace, including the lengthy trial, the punishment (which he considers severe), his bad financial state, the hardship inflicted on his family and his desire to rehabilitate himself. Katsav’s lawyer, Attorney Zion Amir, stated, “I believe it is time for Mr. Moshe Katsav to be released, and I am convinced President Reuven Rivlin will decide to wisely exercise his legal authority, some of which is specified in the appeal we have submitted, whose main arguments are those of charity, compassion and mercy.”