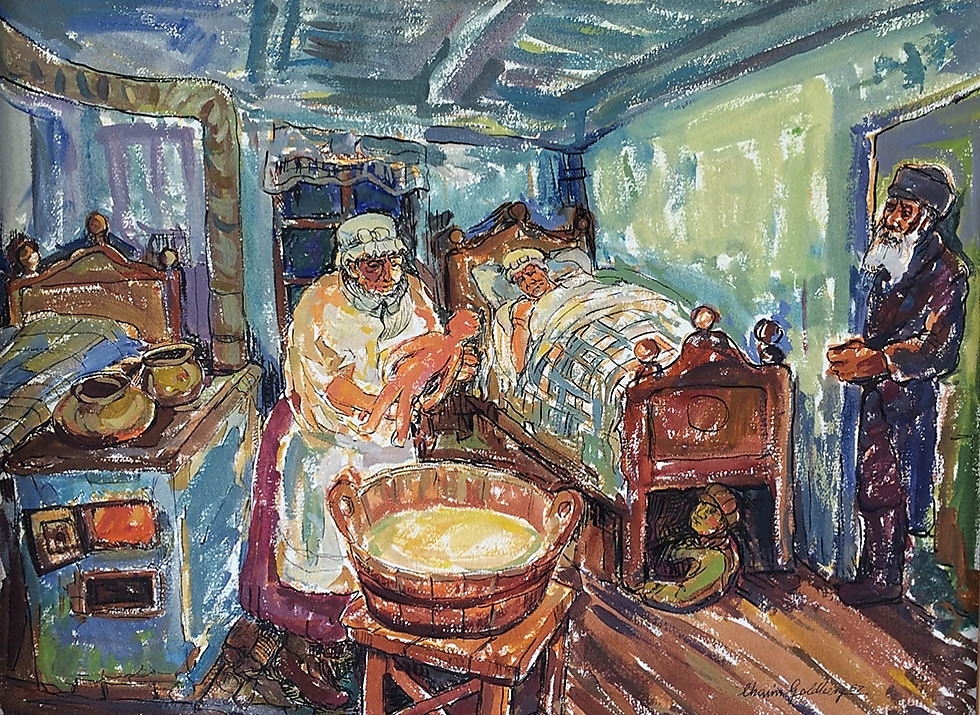 Haim Goldberg, one of the most prolific artists of pre-Holocaust Jewish Europe, will have over 250 of his paintings displayed in a new Jewish art museum in Krakow, Poland.

The "I Remember" museum includes hundreds of paintings by Haim Goldberg and many other Jewish artists.

Goldberg, who was born in 1917 and grew up in the Jewish shtetl of Kazimierz Dolny in eastern Poland, is known as one of the most important documenters of the Jewish community in Poland, which at its peak consisted of over 3,500,000 persons. During the Holocaust, the Nazis almost wiped the entire Polish Jewish community.

Goldberg himself succeeded in escaping the Nazis. He returned to Poland after the war, but moved to Israel in 1955. He then moved to the US 12 years later, where he died in 2004 at the age of 87.

Goldberg was discovered as an artist when he was 14 years old by Professor Shaul Zilberstein when he visited Goldberg's father's cobbler shop in Kazimierz Dolny in 1931.

This is the first time that Goldberg's 250 paintings will be put on permanent display. They show the daily life in the shtetl of Goldberg's youth – the culture, trade, religion, holidays, and the happy and sad events, which charactarized the lives of Jews in Eastern Europe in general and Poland in particular.

Shalom Goldberg, Haim's son, explained that his father's last request was to donate the paintings and have them on display. These paintings are all that remains from this time period in color.

Weddings are the most important events in Judaism. In this painting it's possible to see a representation of how wedding ceremonies were performed in the shtetl. Haim even painted himself into the picture twice – once on the right side of the painting, and again on the roof on the left hand side.

The festival of Purim in the shtetl culminates in an extravagant parade whereby the antagonist of the Book of Esther Haman leads the protagonist Mordechai and on a horse. Haman calls out, "This is what is done to those whom the king seeks to honor."

Few know that Jewish acrobats existed, but they were an integral part of the Jewish shtetl culture. This painting provides a glimpse of an acrobatic street performance, whereby a Jewish acrobatic family and street organist are performing with a parrot.

Shabbat in pre-Holocaust Poland (Art: Haim Goldberg)
This is how a typical Sabbath would have looked in a shtetl; the men and boys would go out to pray in the synagogue, and the women would light candles. Goldberg added an image popular in shtetl, whereby the souls of the dead rise up to heaven by the light of the Sabbath candles.

Trade prospered in the shtetl in the interwar period. This painting shows the market in the shtetl where vendors, craftsmen, and shoppers gather at the city center to buy and sell goods. The markets were typically open on Tuesdays and Thursdays.