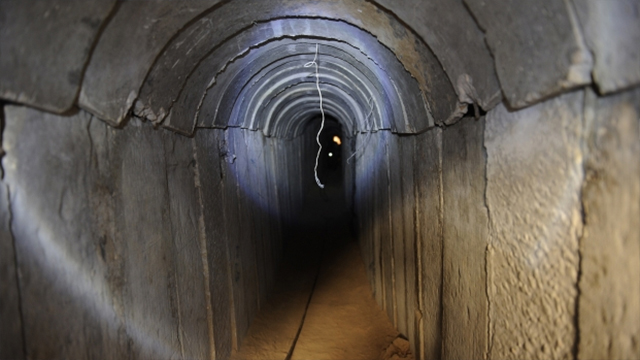 17-year-old Palestinian nabbed after crossing the border fence from Gaza into Israel. He admitted to joining the Hamas military wing at the age of 15, and revealed a wealth of information on Hamas tunnels to the Shin Bet.

Israeli security forces arrested another Hamas tunnel digger, who provided Shin Bet interrogators with a wealth of information on the terror organization's underground tunnel system, it was cleared for publication on Tuesday.

The 17-year-old Jabalia refugee camp resident served in Hamas's militant wing, the Izz ad-Din al-Qassam Brigades, and was arrested after he crossed the border fence from Gaza into Israel on April 6. He was indicted at the Be'er Sheva District Court on Tuesday.

"Following initial investigations, it was revealed that he is a member of the Hamas North Gaza Division, and joined a short time before Operation Protective Edge broke out," the Shin Bet said.

The suspect admitted that the tunnels were to be used by the Hamas Special Forces Nakhba unit to kidnap IDF soldiers, commit suicide attacks, and commit other large scale attacks on Israeli towns. He also admitted to taking part in planting IEDs along the border with Israel and inside the tunnels, and even had IEDs hidden in his home.

After joining at around the age of 15, the teenager was trained by the Hamas military wing to carry out ambushes and surveillance of IDF forces, patrols, and tunnel digging.

The Shin Bet noted that the majority of the training the suspect underwent was offensive attack training, including learning infiltration techniques, storming building, explosives training, and more.

"Hamas is planning to operate inside of Israel in the next round of fighting. The investigation revealed a wide range of information regarding Hamas efforts to dig tunnels under the border for the purpose of sending Hamas militants into Israel," the Shin Bet said.

He disclosed details of the tunnel routes and locations and the labor practices of Hamas tunnel diggers. For example, he told investigators that one of the operational procedures to hide tunnel construction activity was to shower and change out of work clothes before leaving the tunnel so that tunnel diggers wouldn’t easily be identified by the dirt on their clothes.

The Palestinian faces six charges of membership and activity in an unlawful organization, conspiracy to commit a crime (murder and/or kidnapping), attempted murder, weapons charges, and more. According to the indictment, the young man was involved in digging terror tunnels between 2014-2015.

The investigation revealed that Hamas is continuing to dig tunnels. Meanwhile, the IDF is working around the clock to locate these tunnels and destroy them.

"The Palestinian is one of several sources used by the Shin Bet to elicit information about the Hamas's intensive tunnel digging," the Shin Bet said.

The Palestinian teenager is the second Hamas operative arrested by Israel in recent weeks for crossing the technical fence into Israel. Last week it was announced that Mohammad Atuna, 29, also from Jabalia Refugee Camp, was arrested for crossing into Israel with two knives with the goal of committing a stabbing attack against IDF soldiers. He too was arrested by the Shin Bet, and revealed a wealth of information about Hamas tunnels.