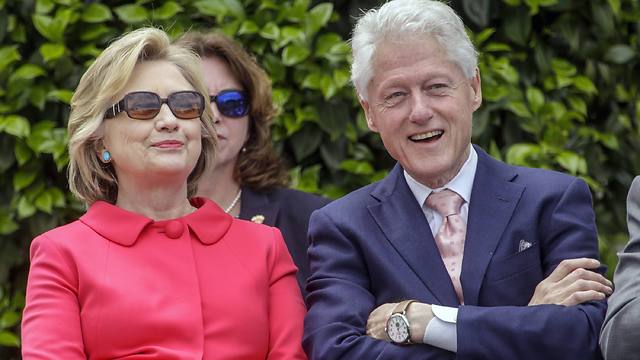 Speaking in New Jersey, the former president spoke extemporaneously about the Israeli-Palestinian conflict in response to a heckler and defended the Jewish State: 'I killed myself to give the Palestinians a state'

Former US president Bill Clinton spoke of Israel and the support that both he and his wife, Democratic presidential candidate Hillary Clinton, have for the peace process.

The topic came up when he was detailing his wife's policies and a voice in the crowd called out, "What about Gaza?" Clinton answered, referencing the negotiations led by then-Egyptian president Mohamed Morsi during Operation Protective Edge, "(Hillary) and the Muslim Brotherhood president of Egypt stopped the shooting war between Israel and Hamas in Gaza." The interjector again interrupted, "She said neutrality is not an option," which led the audience to boo.
Bill Clinton on Israel
X

Clinton replied, "Depends on whether you care what happens to the Palestinians as opposed to the Hamas government and the people with guided missiles." Still dissatisfied, the vocal audience member persisted, calling out, "There were human beings in Gaza."

"Yes, there were," agreed Clinton, who then added, "Hamas is really smart. When they decide to rocket Israel, they insinuate themselves in the hospitals, in the schools, in the highly populous areas. They are smart." This led the crowd to raucous applause.

Hillary and Bill Clinton (Photo: MCT)
"So they try to put the Israelis in a position of either not defending themselves or killing innocents," he continued. The former president then shared his own disappointing experiences in attempting to bring peace to the region. "I killed myself to give the Palestinians a state," he said. "I had a deal they turned down that would have given them all of Gaza, between 96 and 97% of the West Bank, compensating land in Israel—you name it." Finally returning to promoting his wife's candidacy, Clinton complimented his wife's success as secretary of state: "Hillary got the only three face-to-face meetings between Mr. Netanyahu and the leaders of the Palestinians, President Abbas." According to Politico, Clinton continued, "There’s nobody who’s blameless in the Middle East, but we cannot really ever make a fundamental difference in the Middle East unless the Israelis think we care whether they live or die. If they do, we have a chance to keep pushing for peace. "And that’s her position. Not to agree with the Israeli government on everything, not to pretend that innocents don’t die, not to pretend that more Palestinian children don’t die than Israeli children. But that we can’t get anything done unless they believe, when the chips are down, if somebody comes for them we will not let them be wiped out and become part of the dustbin of history."