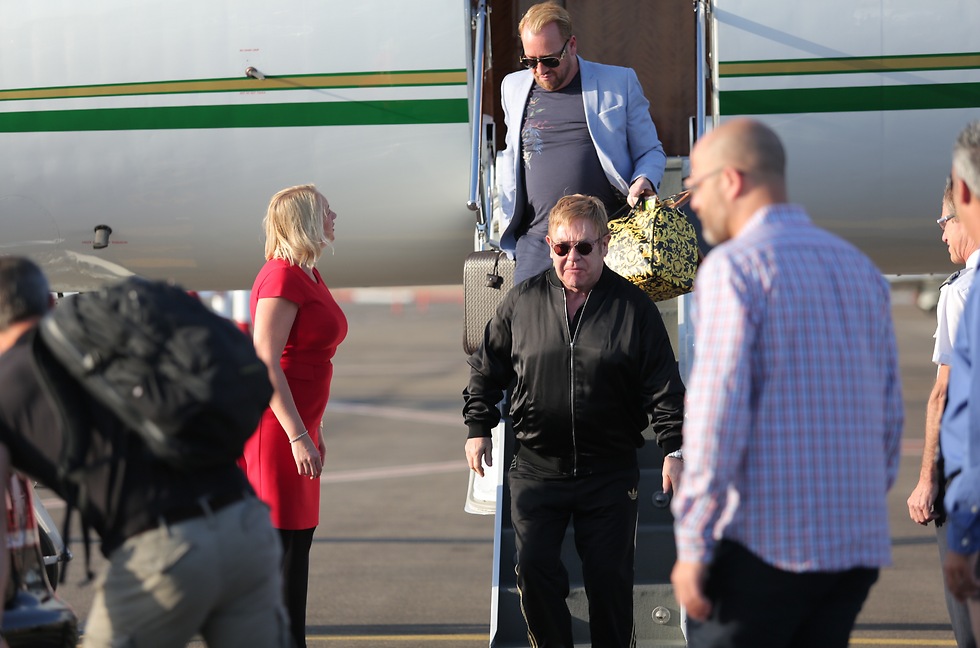 In his 4th appearance in Israel, Elton John kicks off his "Wonderful Crazy Night Tour 2016"; he is performing with his original band members.

Sir Elton Hercules John arrived at Ben Gurion Airport on Wednesday on his private plane ahead of his show at Tel Aviv's Yarkon Park on Thursday night.

He will be kicking off a new leg of his "Wonderful Crazy Night Tour 2016" in Israel and will then head to Europe for a string of shows.

This will be John's fourth concert in Israel, and this time he will be playing with his original band members Nigel Olsson, Davey Johnstone, Matt Bissonette, John Mahon and Kim Bullard.

Sir John will hit the stage at exactly 8:06pm. If you're wondering about the strange time given, there is an explanation: He wishes to give the Israeli public nearly three hours of music, and therefore wants to start early and on time. Do not count on him being fashionably late.

There aren't many surprises in John's setlist. Unlike artists who go on tour to promote their latest album, the British icon knows his audience wants to hear his hits, starting from his early years, such as "Your Song" (dubbed by John Lennon "the perfect song"), "Candle in the Wind," "Goodbye Yellow Brick Road," "Rocket Man," "Don't Let the Sun Go Down on Me," and "Crocodile Rock."

Producer Shuki Weiss, who has brought many great artists to Israel, such as the Rolling Stones, Depeche Mode, and the Red Hot Chili Peppers, is excited about the show. "A knight does not come here every day. The park has even been especially designed for the concert and has never looked like this before."

The coordination with John and his team went smoothly, just as would be expected of someone of his caliber. "These artists have large teams who have been working with them for many years," Weiss explained. "They know exactly what he wants, where he will be comfortable…I've worked with quite a few artists, but there are always those who do it impressively, like Elton and the Stones. They don't have time for nonsense."

John decided to arrive a day before the show, although his original plan was to emerge only today in the magnificent tent erected in his honor behind the scenes. "Perhaps this is due to the fact that he is kicking off his European tour," conjectured Weiss. "I'm counting on him to be full of energy and eager to perform as this is what these artists love, a big crowd."

How many will there be? Ticket sellers estimate that 35 to 40 thousand will be at the park Thursday. The Israeli audience loves hits and likes the fact that John has come here for the fourth time and has ignored calls to participate in a cultural boycott on Israel.

"He dealt with that issue the day it came up. He said it doesn't interest him and that he goes to perform for his fans anywhere in the world. He doesn’t care what anyone says. The man performs 120 times a year and has already filled his schedule for 2017. He is a source of admiration on that level. It's very important for a name like Elton John to appear here. If another artist is hesitating to come here, but then says to himself, 'Wait a minute, Elton John was there,' he will probably no longer hesitate," Weiss explained.

Weiss recently surprised people when he revealed at a Yedioth Ahronoth conference that the Ministry of the Interior asked Elton John to sign a loyalty oath to the State of Israel to get permission to appear. It ended well. "They dropped that demand very quickly, and it was nice that they backtracked," Weiss said.

Sir Elton John, 69, first appeared in Israel on the country's Independence Day in 1979 as part of a tour; all the proceeds went to the charity organization Variety.

In 1993, he landed in Israel for the second time and seemed to be less impressed by the Israelis' warm welcome, as his arrival was accompanied by a scandal that nearly led to the cancellation of his show: When he got to his hotel, he was accosted by dozens of paparazzi, then a great commotion broke out between photographers, John's bodyguards and the British singer himself.

He was supposed to appear at Yarkon Park the next day, but he canceled his appearance and returned to London. After many attempts to bring him back, he returned to Israel two days later and performed the show.

In 2010, he performed at the Ramat Gan Stadium in front of 40,000 enthralled spectators.