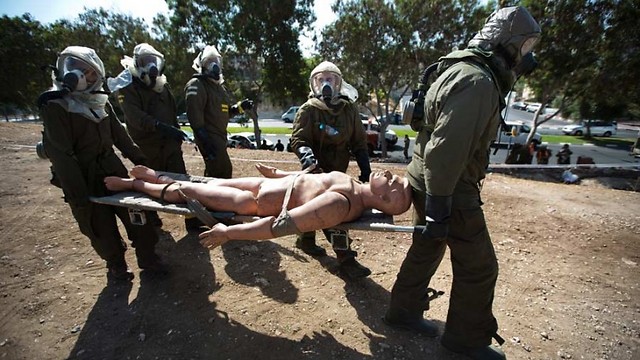 In light of a possible war with Hezbollah, believed to have 100,000 rockets aimed at Israel, citizens will be trained in disaster relief and working with the population.

Israel is forming civil defense units throughout northern Israel to assist in any future conflict between Israel and Hezbollah, Col. Eren Makov, the Northern Regional Commander of the Homefront Command recently stated.

“There is a big change in the Arab population in Israel in that they are much more willing to cooperate with us,” Makov said in an interview. “We give them training in what to do and they see it as a contribution.”

IDF's Home Front Command defense drill (Photo: Menahem Kahana, AFP, Getty Images)
The idea is to train them in both disaster relief and working with the population. After earthquakes, Makov said, 25 percent of those saved are rescued in the first hour, often by their neighbors. A similar situation would probably be in force if Hezbollah, which is believed to have more than 100,000 rockets aimed at Israel, scored direct hits on buildings in residential areas. Israel is not on the verge of a war with Hezbollah, Israeli analysts and military officials say. Hezbollah is bogged down in the civil war in Syria and has lost thousands of fighters defending Syrian President Bashar al-Assad against rebel groups and Islamic State. On one hand, it means that Hezbollah is not looking for another conflict in the near future. In fact, after senior Hezbollah official Mustafa Baddredine was assassinated recently, officials quickly moved to say they do not believe Israel is responsible. At the same time, Hezbollah is developing new fighting skills that could be used against Israel. “When you count the rockets they have, they are as strong as they were before the eruption of civil war in Syria. (But) when you speak about morale, it’s not very high… they’ve suffered many casualties,” said Eyal Zisser, a professor at Tel Aviv University and an expert on Hezbollah. Added to this is the financial burden the organization is shouldering, the professor explained. Israel is also carefully watching the Golan Heights, which Israel acquired in 1967 and later annexed, along the border with Syria. So far, military officials say, the fighting has not spilled over in any significant way. But that could easily change. “The Golan Heights is very sensitive and unstable,” a senior military said. “There are a lot of actors involved in the conflict there (Syria). We believe they understand that they will pay a big price if they get involved with Israel.” Deterrence is one way to lessen the chances of a conflict along Israel’s northern border. Another is preparation, he said. In 2006, Israel and Hezbollah fought a 34-day war that left at least 1200 Lebanese and 165 Israelis dead. An estimated one million Lebanese and up to 500,000 Israelis fled the area of the conflict, and Israel inflicted heavy damage on south Lebanon. In any new conflict, the senior military official says, it is the Home Front Command that will decide whether Israelis should stay or be evacuated. For the past 25 years, any new homes build in Israel must have a reinforced room that can withstand a missile attack. Older buildings are supposed to have communal shelters, although some are in disrepair. Military officials do not rule out evacuating part of the population if needed.

“We are not afraid to evacuate the population – especially close to the border,” the official said. “But we will decide who should leave. Our main message is that anyone who doesn’t get an order to evacuate should stay and understand that his home is the safest place for him.”