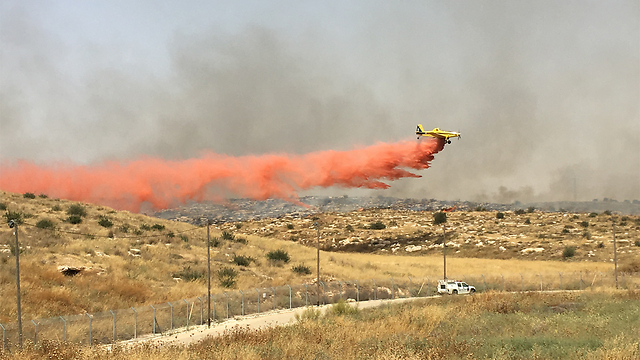 June begins with a heat wave; fires in the north

The higher-than-usual temperatures throughout Israel have lead to a heat wave that peaked on Saturday afternoon; hikers were evacuated from Upper Galilee nature reserve, and firefighters combat multiple outbreaks.

A series of fires in different locations raged throughout the country over the weekend, due to the ongoing heat wave. Hikers were evacuated from the western section of Tel Dan Nature Reserve in the Upper Galilee due to a fire that broke out on Saturday. Firefighting forces were dispatched to the area, and the reserve's access road has been closed.

A larger brushfire continues in Kfar Nin, outside Afula. Seventeen firefighting forces from across the northern region are working alongside six helicopters to prevent the flames from reaching the village's residences. As of yet, the residents have not been evacuated.

Firefighting plane in Lachish (Photo: Sigal Noy)
Since Saturday morning, ten northern firefighting teams and four helicopters have been battling a conflagration in a valley next to the Beit Keshet kibbutz. Some thousand dunams of natural woodlands and brush are ablaze. Volunteers from the Lower Galilee Regional Council are assisting, along with Border and Israel Police.
Fire in Kfar Nin    (צילום: דוברות כבאות והצלה מחוז צפון)
X

In the south, Roads 264 and 358 were temporarily closed to traffic due to forest fires near Rahat and Lachish.

Fire near Afula (Photo: Kalil Hadar, KKL)
Multitudes that are not in danger from fires have fought the heat at northern watering spots. Many travelled to the Valley of Springs, the Nahal Snir and Hasbani Nature Reserves, the Gan Hashlosha National Park, and to the Sea of Galilee's (the Kinneret) beaches. Sources in the Kinneret's control room stated that approximately 33,000 vacationers had come to the site. According to meteorologist Shlomo Oberman of Meteo-Tech, the heat wave peaked on Saturday afternoon, and temperatures are expected to subside overnight. He further explained that the temperatures were higher than average for the season throughout the country.