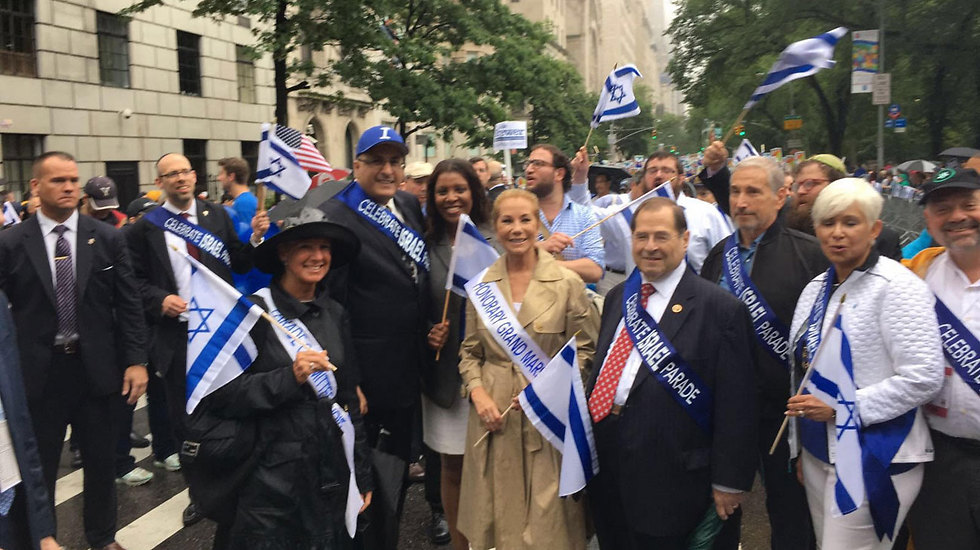 Forty thousand Americans marched on Sunday in the pouring rain to celebrate the annual Israel parade in new York city.

Manhattan’s Fifth Avenue was transformed into a blue and white spectacle as participants waved the Israeli flag and tens of thousands more stood and cheered.

“New York residents believe in Israel and we deeply love the people of Israel,” said New York Mayor Bill de Blasio at the event. “As long as I am mayor, we will stand by Israel’s side.”

The parade, first founded in 1964, is takng place for the 52nd year. Representatives from more than 250 organizations marched along Fifth Avenue from 57th Street to 74th Street accompanied by dancers on rollerskates, motorcyclists, 15 marching bands and dance groups, clowns and jugglers. Joining the parade were also Broadway actors starring in the classic ‘Fiddler on the Roof’ who sang excerpts from the show.

“The parade is not only the world’s largest display of support for Israel but also the largest annual event for Jews in New York who number around 2 million,” said Arik Goldstein, director of the New York branch of UJA-Federation. “It is the only event in new York which succeeds in gathering all strands and sects of Judaism.”

Israel’s ambassador to the UN, Danny Danon, praised the event citing Israel-US ties: “It is heartwarming to see tens of thousands of Americans come to the streets of New York to show their unconditional support for Israel. We have real friends in the US. The alliance between the two countries is stronger than ever and based on deep commitments and shared values.”

The giant show of solidarity on New York's streets was not the only good news for Israel. New York Governor Andrew Cuomo has announced that his state is taking significant steps against the BDS movement, which calls for a boycott against the State of Israel.

Governor Cuomo signed legislation stating that any company that boycotts Israel will be boycotted by the State of New York. The legislation was signed two hours before the Israel parade in New York City.

The governor announced the new measures at an event in the presence of Israel Consul General of New York Ido Aharoni and Director of the Jewish Conference of Presidents Malcolm Honlein, and dozens of legislators including Representative Jerrold Nadler.

Cuomo further stated that he will focus on compiling a list of businesses and organizations that support BDS and will instruct state institutions not to work with and divest from them.

Danon, who hosted the largest international conference against BDS at the UN headquarters in New York last week, welcomed the governor's decision. “Governor Cuomo’s announcement is another effective strike against those seeking to harm Israel,” he said.

“America is Israel’s largest and most important ally, and the governor’s initiative emphasizes this special bond. This is another crucial victory to defeat the BDS phenomenon and other states will soon join the fight and help curb BDS in the United States," he added.

Consul General Aharoni expressed great satisfaction with the governor’s decision and thanked him for his support of Israel and the Jewish people. He mentioned that Cuomo was the only US governor, who visited Israel during Operation Protective Edge.