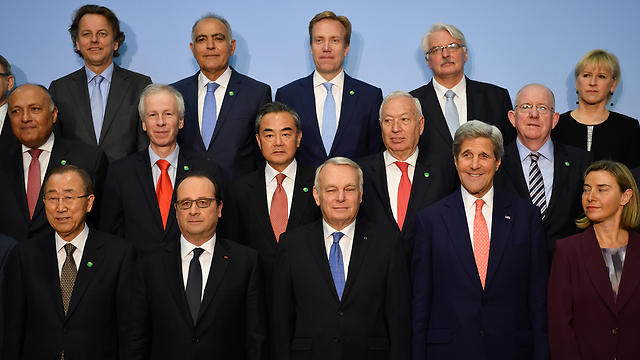 Nabil Elaraby says US delegation opposed a more firm communiqué following peace conference last week; he added that despite Netanyahu’s claims to the contrary, no changes have been made to the Arab peace initiative.

“It changed things and softened its tone,” Elaraby was quoted as saying in an interview.

“It (the communiqué) could have been more firm, but the Americans objected,” he said, adding that US State Secretary John Kerry “was not keen on the idea.”

Much like Saudi Minister of Foreign Affairs Adel al-Jubeir, Elaraby rejected Netanyahu’s recent statements, that certain parts of the initiative must be changed for it to be accepted by Israel.

Last week, Netanyahu said that the Arab initiative was on the table, but that it must undergo some changes.

“We are willing to negotiate with the Arab nations over updating the initiative and having it reflect the dramatic changes that have taken place in our region since 2002, while maintaining the agreed upon goal of a two state solution,” said Netanyahu.

“Israel wants to be paid for its efforts,” Elaraby said in response. “Payment in the form of being granted entry to the Arab markets, particularly when no one is breathing down its neck to reach a solution. I believe Israel wants to enter the Arab world and become an economic powerhouse while cooperating with Arab countries.”

When asked if the Arab League was asked to alter its peace initiative during the Paris summit, Elaraby said that “Even if it had occurred to them, no one actually came and asked for it.”

“Last summer,” added Elaraby. “I heard from a top European official that Netanyahu was very happy in light of certain developments in the Arab world, since it reflected something that Ben-Gurion once said—that Israel’s strength is based not only on its own power, but also on the weakness and deterioration of the Arab world.”