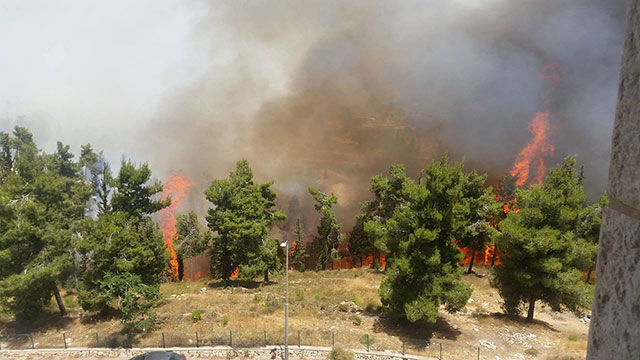 Forest fire rages outside of Jerusalem

Jerusalem Forest near the Har Nof neighborhood of Jerusalem is being threatened by a massive wildfire; 35 firefighting teams, 8 firefighting planes are working to battle the blaze.

A large forest fire is raging in the Jerusalem forest next to Givat Shaul. The fire is being carried by the wind in an easterly direction.

Jerusalem District Firefighter Spokesman Sergeant First Class Udi Gal said that eight firefighting planes have been dispatched, and that "firefighters are fighting huge flames and are trying to prevent them from getting close to houses and critical infrastructure. Additional forces from Beit Shemesh and the West Bank have been called up to help," he said. There are currently 35 firefighting teams fighting the blaze.

(Photo: Alex Kolomoisky)
He also stressed that the flames are being fanned by the wind, and that the fire still is not under control. A seminary and Israel Electric Corporation offices have been evacuated. Gal added that "the fire has rapidly progressed due to strong winds, and is spreading towards the Israel Electric Corporation offices. There are 35 firefighting teams on the ground. We call on the residents of Givat Shaul and the surrounding areas to shutter your homes and close your windows.

Arik Abulof from the Jerusalem firefighters said that "the fire is spreading towards the Har Nof neighborhood. We are sending teams to the neighborhoods and to the (Jerusalem) forest to try and keep the flames from getting to the houses, which would require us to evacuate the residents. This is a persistent fire. We are expecting to be battling this fire for several more hours."

The Jerusalem Police said that traffic has been closed in the Har Nof area, but that route 1 to Tel Aviv remains open.