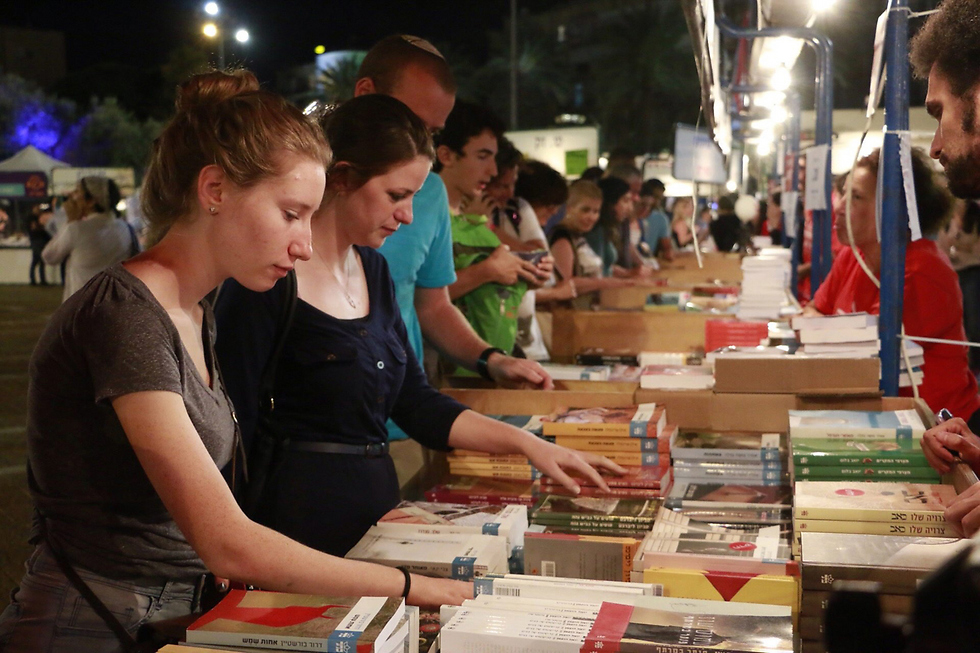 Hebrew Book Week opens with activities, sales across the country

The 55th annual ten-day national festival begins on Wednesday with events in more than 40 cities across the country; large sales from publishing houses are central component; tensions remain between publishers and Culture Minister Miri Regev.

Wednesday marks the beginning of the 55th annual Hebrew Book Week, which is actually to last ten days until Saturday, the 25th.

The outdoor festivals of Book Week will become the largest bookstores in the country and will enable reading enthusiasts to peruse and purchase thousands of titles, new and old, hundreds of stalls, and plenty of cultural activities for all ages, such as children's shows, activities, crafts, musical performances, a mobile library, and storytelling.

Hebrew Book Week 2015 (Photo: Dana Kopel)
In Rabin Square, additional events will accompany the publishers' stalls, from an open-air reading enclosure containing thousands of books for children, youth and adults to a stand for creating bags for books, musical activities for children, storytelling, and a comics corner. A major part of Hebrew Book Week is the consumerist component: a significant number of deals will be offered to the public to encourage purchasing. Readers will be able to meet many popular authors in the publishers' stalls and will be offered a wide variety of discounts and promotions during the only time during the year when book prices may be priced less than is usually permitted by law. The publisher Yedioth Books, which shares an owner with Ynetnews, will give a gift book with the purchase of two others. A discount of 20 percent will also be given for every additional purchase. Steimatzky and Tzomet Hasefarim are both offering the deal of two adult books or three children's books for 99 shekels. Kinneret Zmora Bitan will charge NIS 100 for the same deal. Am Oved will offer a one-plus-one deal on a range of adult books and the same deal as Kinneret Zmora for children's. The past year was a productive one for Hebrew publishing; according to a the annual book report published by the National Library for Book Week, 8,537 new books have been published this year, 225 of those electronically. According to the report, over 120 of those books examine relationships between men and women, some 75 deal with intrafamilial relations, about 30 are about the Holocaust, and 13 are about soldiers during and after their military service. In addition, 959 children's and young-adult books have been published, with the popular subjects being fantasy and science fiction. The multitude of new titles is not deterring new creators. In fact, a slight increase was noted in the books debuting in Hebrew: 388, compared to 372 last year.

This 55th Hebrew Book Week has hovering over it the fresh cancellation of the Law for the Protection of Literature and Authors from 2013 that implemented a fixed price for Israeli books during their first six months on the shelves and also set minimum royalties for Israeli authors. Although the law's cancellation will not take place for another month and a half, dissatisfaction has been noted amongst the various publishers with Minister of Culture Miri Regev.

The Publishers' Association even noted that the Ministry of Culture has not contacted them regarding a visit to Rabin Square during Book Week. "This is the first time that a minister will visit the square and does not do so in cooperation with the association," sources from the organization said. "Moreover, when Minister Regev took office, people from the association asked to meet with her, but they were refused, and this indicates the continuation of such behavior.

The Ministry of Culture replied, "Minister Regev opened Book Week in a municipal library in Lod. In the past, the Publishers' Association had indeed requested a meeting with the minister, but it was not at the time when the committee examining the book law was working, and the minister refused because she did not want to damage the committee's work. The minister would be happy to meet with representatives of the association, and she does not bear any resentment towards them."