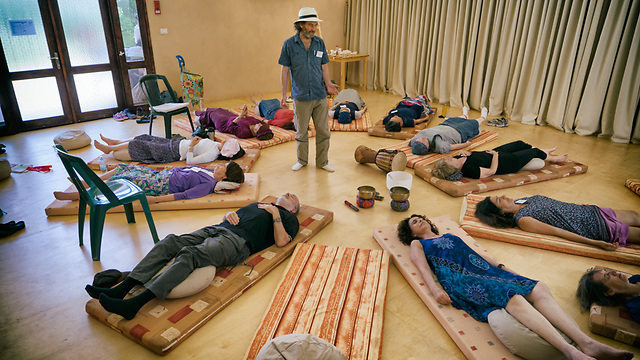 The idea had been incubating for many years, but holistic health activists Sheldon and Ginat Rice finally decided that this was the year it would happen: a week-long health and wellness festival in the Jerusalem hills, in which all activities would be conducted in English.

Last month, it finally all came together, at the Essene Farm, a retreat center in Even Sapir, in the hills of Jerusalem near Ein Karem. Over the course of five days, an average of 80 people a day came to attend classes and workshops—some 120 in all—led by 93 health practitioners and educators.

“We were overwhelmed by the response to our calls for experts who had something to impart,” says Sheldon. “The classes were very well-received: many people who came for a day ended up returning.

“We were also fortunate to attract a dozen sponsors, who donated goods, services and even, in one instance, cash,” he added. “Different vendors also set up shop every day.”

Clearly, the undertaking was a daunting one, although one that hardly seemed to phase the octogenarian Sheldon. He and Ginat covered all the bases, assembling a team of dedicated volunteers to help with registration and kitchen duties—and even organizing a shuttle service from the Mount Herzl terminus of Jerusalem’s light rail system.

Accommodations to fit every budget were also available: shared cabin rooms, sites for pitching tents, and the more luxurious Zimmer Yarok (a guesthouse-type accommodation —ed.), where I spent a very comfortable night.

As evidenced by their website—The Rice House—Sheldon and Ginat Rice are most definitely on a mission. They recount their own personal stories of healing from cancer, which are indeed heartwarming and inspiring. They began counseling others on the manifold benefits of a macrobiotic diet, including hosting large meals in their home. They also would travel every year to large holistic health fairs in the United Kingdom, Belgium and the United States. These became the models for this spring’s Whole Health Forum.

Sheldon and Ginat
“The major emphasis of the Whole Health Forum is education for wellbeing,” Sheldon wrote in his introduction to the event. “The daily schedule includes lectures, cooking classes, workshops, meditation and movement sessions, all encouraging participation, dialogue, and inner exploration. The natural setting of the Forum at the Essene Farm, away from the distractions of normal life, encourages total focus on health and friendship. “The hallmark of our education program,” he continued, “is daily lectures on natural health theory and practice. Experienced speakers present ideas and methods in new and exciting ways. Teachers include medical doctors, practitioners of traditional Chinese medicine, vegan activists, artists, cancer survivors, energy workers, exercise leaders and many others. These presentations are designed to improve your understanding of principles leading to greater health and happiness.” Activities started early in the morning, with classes in yoga or chi gong; there were additional opportunities for physical exercise during the day, such as dancing or walks in the woods with guides.

Lectures, classes and workshops were conducted throughout the day. These included Powerpoint presentations, interactive sessions and demonstrations of actual therapies. Given this schedule, and the scores of teachers representing so many different fields and approaches—it is impossible not to learn something new: in less than two days, I was exposed to new theories, techniques and even exotic diagnostic and treatment methods and instruments (for example, the Rife machine used in frequency therapy).

In addition, there were food preparation classes teaching various cooking styles, such as raw and fermented. Chefs instructed on selecting quality ingredients and preparing dishes and meals designed to be both healthful and appetizing. With so much going on from morning until night, three meals a day were prepared and served.

“We decided to make the quality of the food a top priority,” Sheldon told a reporter prior to the Forum. “We were able to hire Venu Sanz, macrobiotic chef extraordinaire from Spain. We are thrilled to have attracted someone of such high international caliber.

“Kashrut was also important, as we want our message to be available to all sectors of Israeli society. We know that kashrut l’mehadrin can be prohibitively expensive, but we were not willing to compromise. Serendipitously, on a visit to meet with presenter Rabbi Benzion Lehrer in Safed, we found out that he is a certified mashgiach, able to supervise all our food. Amazingly, he is also a trained macrobiotic chef, familiar with our cooking methods and specific dishes. Rav Lehrer will even bring a Torah to the Forum in order to lead daily prayers and a morning study group.”

There was indeed tasty food that could be enjoyed by anyone, even those following the strictest of diets. The food was 100 percent vegan, macrobiotic in principle, but open to including organic seasonal fruits and vegetables. Gluten-free options were always available; moreover, possible allergens, such as nuts, were served separately. Finally, all desserts were sugar-free, containing only the healthiest of sweeteners, like silan.

Evening programs -- under the heading “Relax and Learn” -- were varied and entertaining. There was storytelling, musical performances, panel discussions, even a special appearance by an international celebrity: Charles Green, portrait photographer of the British royal family.

The guest speaker one evening was Ori Shavit, who reprised her fascinating TED talk describing her journey from food critic to vegan activist. She shed interesting light on the “vegan revolution” underway in this country—Israel now has the highest percentage of vegans in the world, she reveals—and the rise of gourmet vegan restaurants in Tel Aviv.

Another evening featured a panel of survivors of severe illnesses, who related how they had taken on themselves the responsibility for healing themselves. Shulamit Lando, who has written a book about her experience, now coaches sufferers on how to remain serene in the face of illness.

According to Sheldon and Ginat, the aim of the Forum is to harness the energy and spirit of the participants in order to build community, support healing and teach a life of success.

“Health is a much talked-about subject,” they sum up, “yet taking one’s health into one’s own hands is still not something most people have the confidence to do. Preventive health care has to be the predominant health paradigm of the future. This Whole Health Forum gives us the opportunity to share knowledge, to motivate and to inspire each other, to explore and experience different therapies and to demonstrate how to better ourselves in all aspects of health.”