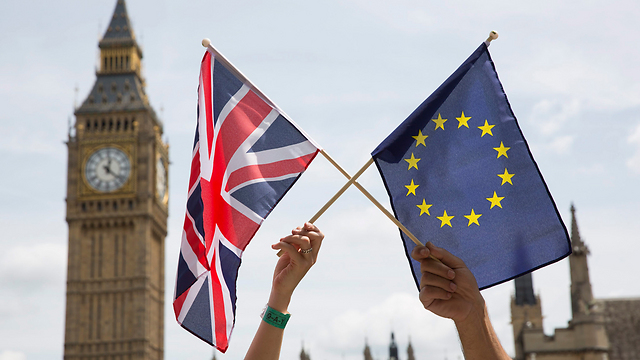 How would Brexit affect Israel?

Israeli analysts are divided on what Brexit means for Israel, some believe that it portends negative changes and will empower the anti-Israeli elements of the European Union; meanwhile, others hold that it strengthens the case for nationalism in the 21st century and thereby, Israel as well; Palestinian analysts say regardless of results, there is a growing trend of sympathy for Palestinian cause in the UK and Europe.

In the run up to Thursday’s vote in Britain on whether to exit the European Union, Israeli policymakers have studiously avoided comment, desiring not to be seen as interfering in the UK’s internal affairs. Israeli analysts nevertheless stress that Israel has a definite stake in the outcome, though they differ on whether a British exit (Brexit) would be good or bad for its interests.

European Union and United Kingdom flags (Photo:EPA)
Polls show that the race is too close to call, with the latest surveys pointing to a resurgence in support for remaining in the EU. An opinion poll for the Mail on Sunday taken June 17-18 showed 45 percent in favor of remaining and 42 percent in favor of leaving. The stakes for Israel became greater on Monday when all 28 EU foreign ministers decided to endorse the French peace initiative, which began with a meeting in Paris earlier this month and which, according to French President Francois Hollande’s plan, will culminate in an international peace conference dedicated to relaunching Israeli-Palestinian negotiations to be held before the end of the year. Israel adamantly opposes the French initiative, seeing it as a bid to impose a solution on it against its security and interests. ”International conferences like those that the EU’s foreign ministers welcomed push peace further away because they enable the Palestinians to continue to avoid direct talks and compromise,” the Foreign Ministry said in a statement Monday. Israel’s hopes of staving off the initiative and its standing vis-à-vis the EU could be set back if Britain exits the body, according to Oded Eran, former Israeli ambassador to the EU and now a senior analyst at the Institute for National Strategic Studies in Tel Aviv. ”It is preferable for Israel that Britain remain in the EU, where it is a voice of moderation” in favor of Israel, Eran told The Media Line. Because of Britain’s close relationship with the United States, London tends to be more sympathetic to Israel than many other EU countries, Eran says. Economically, the EU is Israel’s largest trading partner ”and it is important that it remain robust” he says. In the security sphere, Britain is one of the most active members of the EU and NATO, he notes. ”We prefer to see a stronger Europe in its battle against terror and other threats,” he says. But it is in the coming diplomacy over the French initiative that Eran believes Britain’s presence in the EU is acutely needed by Israel. In the run up to the planned conference, ”Britain’s role is still very important for Israel,” he said. In Eran’s view, the United States is not very enthusiastic about the French initiative and is likely to seek to foil it, possibly in favor of an American initiative, provided Prime Minister Binyamin Netanyahu facilitates this by showing some flexibility on peace issues. In this case, he believes, Britain would assist the US in trying to convince the French and other Europeans to make way for American moves. ”Britain would play the role of facilitator of the American efforts to enable Netanyahu to take a different track than the French initiative.” However, if London exits the EU, ”Israel will lose a moderating factor, a voice that could help it avoid the French initiative if necessary.” British Prime Minister David Cameron, whose political future depends on a vote to remain, is seen in Israel as a reliable friend. Defense and intelligence ties have reportedly been quietly but considerably strengthened under Cameron. During the Gaza conflict in 2014, his Conservative party for weeks withstood pressure from its Liberal Democrat coalition partners to condemn Israel’s military campaign. The international conference push is far from the first time that Israel finds itself at loggerheads with the European Union. The EU considers Israeli communities built on the territories captured by Israel during the 1967 war to be illegal while Israel disputes this. The EU says the settlements are an obstacle to peace, something Israel denies. Last November, the differences came to a head as the EU required goods emanating from the post-1967 areas to be labelled to that effect, rather than being marked ”product of Israel.”

UK Prime Minister David Cameron
The Israeli foreign ministry blasted the decision, terming it in a statement ”an exceptional and discriminatory step inspired by the boycott movement.” Israel and the EU are also at odds over Israeli demolition of Palestinian structures, some of them EU-funded, in the Oslo Accords-designated “Area C” part of the West Bank, meaning under full – administrative and security – control by the Israelis. Israel maintains it is merely acting against illegal construction while the EU views the same building as vital to the Palestinian presence in an area it sees as crucial to Palestinian statehood. In the view of Efraim Inbar, head of the Begin Sadat Center for Strategic Studies at Bar-Ilan University, the EU stances on these issues reflect an ”anti-Israel” orientation emanating from Brussels. ”If Britain leaves and the EU becomes weaker, it will impact positively on Israel,” he told The Media Line. ”The EU as a whole is much more anti-Israel than its individual countries so if it is weakened that will be good.” Inbar adds that a British exit, in so much as it can be seen to reflect heightened nationalism of individual European nations, could help boost sympathy for Israel. ”The EU is basically a post nationalist phenomenon while Israel is a nationalist phenomenon, so with each country being nationalist there will be a greater understanding of Israeli behavior,” he says. In contrast to Inbar, Alon Liel, the dovish former director-general of the Israeli foreign ministry, says that Britain exiting the EU would be a negative development. ”The EU as an aggregate is much more pro-peace than its individual members. To have such a major country depart is weakening the Brussels machine,” Liel told The Media Line. The Palestinians for their part do not expect the British decision to have a significant impact on them, according to Ghassan Khatib, Vice President of Birzeit University in the West Bank. Regardless of what happens with the vote, there is a trend in European and within British public opinion of greater sympathy with the Palestinian cause, he says. The French initiative’s acceptance reflects this, he adds.

”These trends will continue in the EU and Britain whether Britain is in or out because there are objective reasons for them,” Khatib tells The Media Line, citing Israeli behavior as being foremost among them. ”Israel is doing the kind of thing that even friendly countries like Germany and Britain don’t want Israel to do such as expanding the settlements and this is effecting negatively their support for Israel.”

In Amman, Sabri Rbeihat, the former minister for political development, says that supporters of the Jordanian monarchy want Britain to stay in the EU.

”There is a long historic relationship and a feeling that the British have an understanding of the area and its geography and history. Many feel the Jordanian regime was created and maintained by Britain,” he told The Media Line. The EU without Britain ”would be an unknown, a question mark, there is a sense of uncertainty over what would happen and who would steer the EU.”

Article written by Linda Gradstein and reprinted with permission from The Media Line .