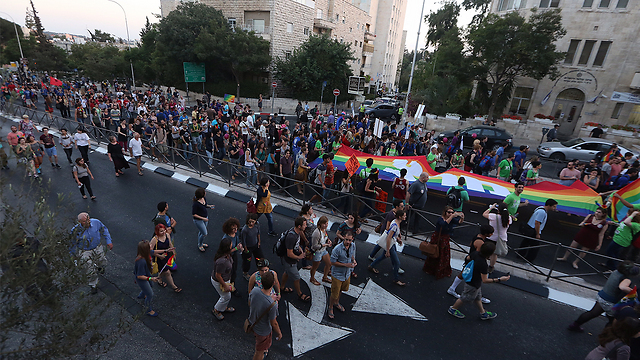 After initially considering Pride as a 'political act,' following Ynet story IDF issues clarification that soldiers are allowed to march so long as they are out of uniform, off duty and refrain from political starements.

Following Ynetnews coverage of the story, the IDF released a clarification to a previous statement, saying that soldiers are not allowed to march in next week's Jerusalem Gay Pride parade, even out of uniform.

Issuing a new response due to the vehement criticism its first statement had raised, the IDF then explained that soldiers are in fact allowed to participate in Pride events, provided they wear civilian clothing, are not on duty and provided they not issue any political statements.

The initial prohibition came prior to the upcoming Be'er Sheva and Jerusalem parades, despite the fact that soldiers out of uniform were allowed to march in previous Pride parades this year in other cities throughout Israel. It was based on the fact that the army now considers the parade a "political statement."

In an interview with Ynet, IDF reserve soldier Omer Nachmani came out against the directive. "The IDF Spokesperson, the chief of staff's Women's Affairs Advisor (who also deals in matters of sexual orientation and gender) and all the top officials are now saying that those who serve in the Israeli defense forces cannot march in the Pride parade."

2014 Jerusalem Pride parade (Photo: Gil Yohanan)
Nachmani, who is one of the leaders of recent protests by IDF reserve soldiers against discriminatory and homophobic policies carried out by the IDF, stressed, "This isn't a matter of right and left; sexual orientation is not a political matter."

Nachmani made it clear that he appreciates the IDF's work, adding, "This is a liberal army; that's what is so absurd. The IDF allows out gay soldiers to serve, allows transgender soldiers to serve, and also funds their hormonal treatment, so there's a really big gap between (both positions)."

A Pride/Israeli flag hung at an army base
When asked whether anyone in the army had ever made an issue out of his sexual orientation, Nachmani said no. However, he did acknowledge "the incredible hypocrisy of the IDF, which on the one hand sends delegations of gay soldiers abroad to showcase how progressive it is, and on the other hand forbids its soldiers from marching." At first, the IDF Spokesperson's Unit responded to the criticism received over the command by saying that "The IDF has a directive in place that applies to soldiers taking part in protests and marches. Upon further discussion, it has been decided to update it, a process that is already in its advanced stages." As mentioned, eventually it issued another statement permitting its soldiers' participation.