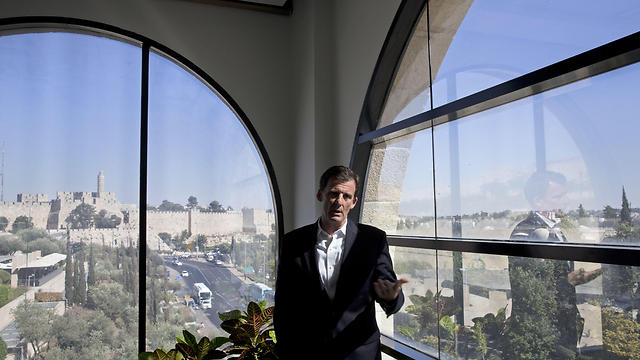 Helping Palestinians was an uphill battle for US aid chief

'Frustrating' is a word Dave Harden said repeatedly in an interview he gave as he stepped down from 11 years of heading USAID's delegation to the Palestinians, helping to distribute some $3.8 billion.

After 11 years of helping oversee the US government's aid efforts to lay the foundations for a future Palestinian state, the outgoing chief of the US Agency for International Development mission in the West Bank and Gaza Strip is unsure whether that vision has inched any closer to reality.

"It's frustrating. It's definitely frustrating," said Dave Harden, who is leaving his post on Friday and returning to Washington to become an assistant administrator of USAID. "Frustrating" is a word Harden said repeatedly in an interview with The Associated Press. During his tenure, he saw three US envoys attempt, and fail, to advance the cause of peace. He worked in one of the world's most complicated political arenas and headed one of the most scrutinized USAID missions, on account of American lawmakers' concerns that American money could reach Palestinian militants.

Dave Harden speaking in his Jerusalem office (Photo: AP)
Starting as deputy mission director in 2005 and later taking the helm of USAID's mission in the Palestinian territories, Harden presided over some $3.8 billion in investments to help improve Palestinians' lives—from paving roads, laying water lines and building schools, to funding the Palestinian version of the children's television show Sesame Street and helping a Palestinian fair trade olive oil distributor supply oil to the Whole Foods supermarket chain in the US He did so while tiptoeing through a minefield of obstacles. He weathered a temporary congressional freeze on USAID funds in 2011 as punishment for the Palestinians' appeal to the United Nations for statehood, a move the US saw as sidestepping negotiations with Israel. USAID projects are strictly vetted, and aid recipients must sign an anti-terrorism clause to ensure money doesn't get into militants' hands. Those restrictions limit the extent to which the US can help Palestinian civilians in the Gaza Strip, which saw three devastating Israeli military operations in the last decade in response to Gaza's militant violence against Israel. There are only a few hospitals USAID can support in Gaza, Harden said, because the ruling Islamic militant group Hamas controls most of the territory's hospitals. The US, like Israel and the European Union, considers Hamas a terrorist group and has no direct contacts with it. Harden counts among his successes negotiating with Israeli military officials to approve development projects in the West Bank.

(Photo: AP)
One was to help turn around the West Bank city of Jenin, once known as a hotbed of militant activity. "Jenin was a no-go zone," he said. "Jenin was dangerous, poor, despairing." In 2007, Harden said, he helped convince hesitant Israeli military officials to allow Palestinian merchants in Jenin to export goods to Israel and abroad. USAID invested nearly $10 million in security scanners and upgrades to the Israeli-manned entrance and exit into the city to ensure it was secure. He said he also negotiated with Israel to allow its Arab citizens to come to Jenin for weekend shopping sprees, what he called "a very big psychological deal for the Israelis." Harden estimated that this led to a $230 million economic boost in the city. He also believes the boost has contributed to the low number of Palestinians from the Jenin area who have carried out attacks against Israelis during the current 10-month wave of violence. He said he hoped the Jenin example could be replicated for other West Bank cities. USAID has also invested more than $300 million in hundreds of water projects in the West Bank and Gaza, including laying 960 kilometers of water pipelines, connecting 149,000 Palestinians to running water for the first time and giving more than one million people access to clean water. Since 2011, USAID also secured Israeli permits for 20 Palestinian infrastructure projects in the politically sensitive areas of Area C—sections of the West Bank that remain under full Israeli control. This land, home to Israeli settlements and military bases, makes up over 60 percent of the West Bank. The international community has long complained that tough Israeli restrictions on Palestinian development in Area C, where an estimated 180,000 Palestinians live, are a major impediment to the establishment of a future Palestinian state.

(Photo: AP)
USAID's close relationship with the Israeli military helped the agency advance development projects in Area C, while European projects have been bulldozed by the Israeli army because they were without proper authorization, said Nathan Thrall of the International Crisis Group. But Thrall said many Palestinians see USAID as "gilding the cage" of a US-financed Israeli occupation of the West Bank. The Palestinians completed a two-year state-building program in 2011, winning the approval of the International Monetary Fund, the World Bank and others who said the Palestinians were ready for statehood. But the US did not pressure Israel into helping the state materialize, angering the Palestinians, he said. "Many thus view the projects of USAID as little more than hush money for the considerably larger sums that are given by the US to the Israeli military," Thrall said.

Harden said his agency's mandate is limited when it comes to realizing the vision of a Palestinian state alongside Israel.

"We operate in a political framework that defines the answer to the two-state solution. It's not something that I can control," he said.

(Photo: AP)
Much of Harden's time was spent jetting to Washington to meet with lawmakers who had what he called "intense, intense, intense" skepticism about how US aid is used in the Palestinian territories. Harden said he forged bipartisan support in Congress and constructive discussions with lawmakers. "There are relatively easy arguments to make when you have to explain it," he said. "Do we want to deliver water? Do we want to build roads?"

"That would be something that worries me as I walk out the door," he said.