Erdogan, the devil we know 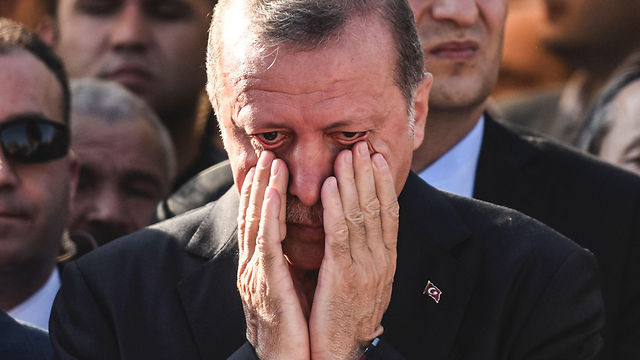 How Erdogan survived the coup, and why we needed him to

Analysis: The attempted coup in Turkey over the weekend bore striking similarities to the military overthrow of the Muslim Brotherhood regime in Egypt three years ago; However, a combination of public support, military ineptitude, and economics all resulted in Erdogan being able to weather the storm.

People in the Egyptian media thought that Turkish President Erdogan was going to be the second Mohammad Morsi. Several TV presenters in Cairo were quick to celebrate "Erdogan's downfall" on the night of the attempted coup, and announced the fall of the Muslim Brotherhood patron.

Hezbollah was quick to celebrate the fall of the main supporter of the Sunni rebels in Syria, and Assad regime supporters in Syria mocked the "undermining of the throne of the Ottoman sultan."

However, the coup was too weak to succeed. Why did it happen? Why did the coup against the Muslim Brotherhood in Egypt succeed while in Turkey it failed? What does the failure of the coup mean for Israel?

Erdogan is afraid of becoming Morsi

The world watched in shock as the pictures came out of Turkey – attack helicopters in the sky and tanks in the streets, people going out to stop armored personnel carriers, and finally, wave after wave of arrests of both soldiers and lawyers. For a moment, it seemed that Turkey would go the way of Egypt, where the exact same thing happened three years earlier. The Egyptian Armed Forces, with Abdel Fattah a-Sisi at its head, ejected the Egyptian "Freedom and Justice" party in the summer of 2013, and the elected leader Mohammad Morsi was put in jail.

Turkish President Erdogan (Photo: AP)
In Turkey, high ranking military officers tried to overthrow the "Justice and Development" party and arrest Erdogan, who happens to be a friend of Morsi. In both cases, a secular military went up against Islamist political parties, resulting in an ideological battle to determine the direction of the nation.

The army has been threatening Erdogan since he came into power in 2003. Kamal Ataturk, the founder of modern Turkey, created a mechanism of checks and balances whereby the military is supposed to protect the country from takeover by a religious political party. In fact, the military prevented the "welfare" Islamist party from undermining the secular nature of the state, and then President Necmettin Erbakan was banned from participating in politics in 1998.

Turks on top of a military vehicle (Photo: AP)

Erdogan was terrified by what he saw during the military takeover in Egypt in 2013, and in him a deep seated worry that a similar style coup can happen to him in Turkey grew in him. He watched in horror how the world quickly recognized the a-Sisi regime which took over a democratically elected government. Several countries, led by Saudi Arabia, publicly expressed their satisfaction with the fact that the Muslim Brotherhood government in Egypt was taken down. This is Erdogan's nightmare, and one of the main reasons he will never recognize a-Sisi's rule.

Many countries waited for the results of this latest coup attempt in Turkey. The Qataris were the only ones to congratulate Erdogan on the failure of the coup. Egypt and Saudi Arabia have kept quiet, while the rest of the condemnations of the coup were weak.

Why did the secular military fail in Turkey but succeed in Egypt?

While the military takeover in Egypt was led by the Egyptian Armed Forces Chief of Staff General a-Sisi, the Turkish coup attempt was led in Ankara and Istanbul by lower ranking military personnel, and only a few tanks and helicopters. The majority of the Turkish military didn't join in.

Former Egyptian President Mohammad Morsi in jail (Photo: AP)
Since Ataturk's reign in the 1930s, there have been four military coups in Turkey, three of which succeeded, and all were headed by the chief of staff of the Turkish military. In Egypt, General a-Sisi had a huge support base – especially in Cairo – and it was done under the framework of a secular nationalist protest. Yet in Turkey, although the people invovlved in the coup took over the TV networks, Erdogan succeeded in bringing out masses of supporters onto the streets via a call to action on Facetime which proved how much support he truly has in the country.

Egyptian President Abdel Fattah a-Sisi (Photo: EPA)
The Muslim Brotherhood only controlled the country for a year and failed in bringing economic stability. Meanwhile, Erdogan brought about unprecedented growth in the economy. His economic success – based on a large amount of cheap labor, tourism, an ideal geographic location between Asia and Europe, being a pipeline for Iranian and Iraqi Kurdish oil, alongside his continuing efforts to make sure the Turkish military doesn't get too powerful – have all undoubtedly strengthened his hold on the government.

Despite the fact that the coup attempt didn't include any high ranking members of the military, its timing was not coincidental. Many members of the military view Erdogan's policies vis-à-vis Syria and the rebels as a failure, and they believe that there must be consequences. It seems that Erdogan has no consistent policy in Syria, which is a reason he has seen failures time and time again.

Turkey was a patron of the Free Syrian Army (FSA), comprised of various Syrian Arab Army defectors in 2011. Turkey later threw its weight behind Islamist movements which were more in sync with the Turkish government's own Islamist ideology.

Turks rally in Taksim Square (Photo: EPA)
Finally, the country began to permit the unhindered movement of ISIS volunteers through its country into Syria, enabling the movement to slaughter various rebel movements in eastern Syria, and arguably helped strengthen the Assad regime.

Turkey failed in its efforts to oust the Kurds (from north-western Syria –ed) via ISIS. Instead, the opposite occurred; the Kurds have managed to illicit world sympathy for fighting against "the cancer of ISIS." The US has been giving aid to the Kurds in Syria under Erdogan's nose. This has resulted in Turkey's worst nightmare coming to life – a Kurdish autonomous region in western Syria (called Rojava by the Kurds) along the entirety of Turkey's southern border.

Erdogan then changed his policy again, and a year ago, began allowing the US to use Turkish airbases to hit ISIS, and Turkish forces even participated in hitting ISIS in Syria. Therefore, ISIS has begun hitting Turkey with suicide attacks. Turkey is now seeing ISIS attacks against its citizens, and Kurdish attacks against its security forces.

Is this good or bad for Israel?

Hypothetically, had the Erdogan regime fell and been replaced by a secular military leadership, relations would have gotten better and gone back to the way they were before Erdogan came to power in 2003. However, no one knows what the actual relations between the military leadership and Israel are. Would Islamic scholar Fethullah Gülen, currently in self imposed exile in Pennsylvania, have had a more moderate approach towards Israel than does Erdogan?

If one is to look at the current situation in Turkey, especially in light of the mass support Erdogan has, one can assume that had the coup succeeded, Turkey wouldn't have suddently become a secular country – it would have probably led to a civil war between the members of the military who are against the regime and those who support it, between religious and secular people, and between eastern and western Turkey.

A show of Hamas support for Erdogan in Gaza

Hamas celebrated Erdogan's survival – especially since he is the organization's sponsor. However, this doesn’t mean that Israel should automatically be in support of his fall. Its important to remember that it is Erdogan is managing the reconciliation agreement with Israel, and is interested in normalizing relations.

Turkey – much like Qatar – is interested in supporting Gaza's rebuilding and sending food, clothes and building materials to Gaza, and is well aware that rocket fire from Gaza will ruin their investment. Therefore, Sunni Turkey's (and Qatar's) economic support is much more preferable to the alternative – Shia support from Iran and Hezbollah, which will invariably include explosive material, missiles, and and other weapons.

Erdogan won't turn into a great lover of Israel, but whether or not the government which would come to power after the coup would be a lesser evil is unknown. Despite his aversion to Israel, Erdogan has in interest in Israel being a tourism and economic partner for Turkey. The successful Turkish economy is a primary factor for the stability of the government, and is also what saved it during the attempted coup.