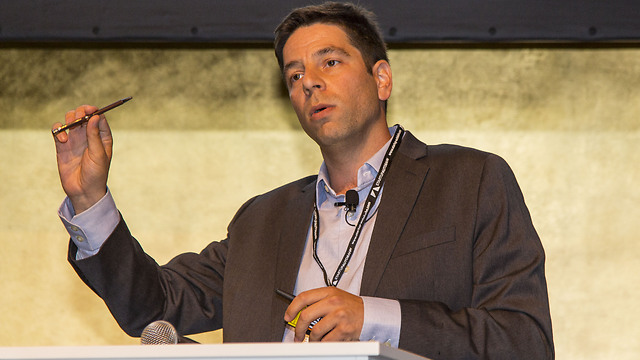 Gauzy's cutting-edge technology, which allows control of glass's levels of transparency and opacity, impressed the global automobile company so much that Mercedes is working to incorporate it in its cars.

STUTTGART - An Israeli start-up company recently announced that it has been working in collaboration with Mercedes-Benz Cars Daimler AG for the past three years. The announcement came during a prestigious automotive high-tech competition held in Stuttgart, Germany, during which the Israeli company, Gauzy, was also selected among the final ten.

The event, Start-up Autobahn, is a global hardware and mobility innovation platform intended to connect top mobility start-ups with resources from corporations, investors, and universities. It was sponsored by Plug and Play tech center in Silicon Valley, Daimler and the University of Stuttgart. Gauzy has created technology using unique liquid crystal film which can be embedded into raw materials—with a current focus on glass—to perform a vast array of functions including, inter alia, providing users the ability to control its levels of transparency and opacity.

So impressed was the automobile giant by Gauzy’s versatile innovation—which is set to be incorporated into future Mercedes models—co-founder Eyal Peso was invited by Mercedes-Benz Daimler to deliver a keynote speech at the event entitled ‘Confessions of a start-up working with Mercedes Benz.’

During the presentation, Peso shared with some 800 investors, aspiring entrepreneurs and internationally renowned tycoons the lessons he had learned since the inception of his collaboration with Mercedes-Benz, before treating his audience to a presentation demonstrating the magical multi-applications of his cutting-edge technology.

Following the speech, Professor Thomas Weber, a member of the Board of Management of Daimler AG, who is responsible for Group Research & Mercedes-Benz Cars Development, furnished praise on Gauzy’s product.

“I like this kind of innovation in our cars," Weber told Ynetnews. "We can use this type of thing that would offer us additional opportunities. You can immediately switch between different styles. As everybody knows, light is a really important influence which affects your motivation, your mood and also when it comes to security or safety. It is a great idea and I am looking forward to see much more of (Gauzy).” Asked whether he expected Gauzy’s impact on the automotive industry to match those of previous Israeli automotive-related technology such as GPS app WAZE or driver assistance system Mobileye, Weber responded unequivocally: “Yes, of course,” he said before extolling the virtues of Israel’s innovative spirit as he expressed his hopes for further collaboration with Israeli start-up companies. “I see a huge potential to cooperate with big companies based in Israel. We are in regular contact with them to exchange information which we hope that, based on this event today, will allow us to learn more about companies and entrepreneurs.” The opportunity to learn about Israeli innovation was not in short supply at the event. Out of the 22 finalists in the competition, which began with 300 contenders around the globe, six were Israeli. Indeed, as each start-up was introduced to deliver its pitch, even the moderator could hardly resist injecting his own commentary on the impressively conspicuous Israeli presence: “Would you believe it, the next start-up is from Tel Aviv,” and, “How can such a small country be so innovative?” he asked the attendees. Saeed Amidi, CEO and Founder of Plug and Play Tech Center, who also delivered a keynote speech, reflected on the speech delivered by the Gauzy CEO while echoing the sentiments of Prof. Weber regarding Israel’s contribution to the automotive industry. “I felt really excited about having an Israeli company doing one of the talks. I believe Israel is really good for innovation and entrepreneurship and is one of the more dynamic places in the world,” Amidi said during an interview with Ynetnews. Moreover, he emphasized the importance of the lessons offered by Peso: “He said you have to have a champion inside Mercedes and if you do not have someone really in love with the product, it is impossible to get it through the bureaucracy of any big corporation. I think that was his best and biggest message,” said Amidi, who boasts a glistening investment record comprising unicorn companies such as PayPal and Dropbox.

“We would love the start-ups chosen today to start similar to Gauzy with a super champion inside Mercedes,” he concluded.

At least two Israeli companies, including Gauzy, were selected in the top ten and will now join the Start-up Autobahn accelerator. The winners will be allocated research and development space in Stuttgart in their pursuit of their hard-earned dream. Peso’s exhibit of his product in action at the event attracted dozens of enchanted spectators. During the rare moments in which his attention was not occupied by the curiosity of those passing by, he shared his thoughts with Ynetnews on what it all meant for him. “It is a huge honor to finally be recognized after three years working with Daimler, especially given that it was all confidential until now. Finally we had a stage to announce it and Mercedes wants it in their cars,” Peso said. "The accelerator and our participation in it, not just in providing a keynote speech but also in being selected first out of all these 300 startups to participate in the accelerator, is basically a commitment from Daimler saying 'We want this to work.' So it is both a platform and a commitment and this is a great honor.”