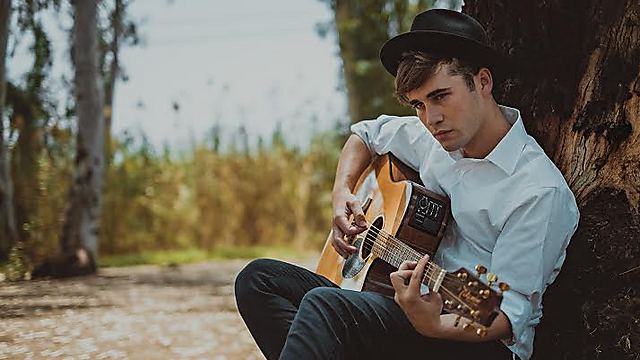 A (Hasidic) star is born

With a song in his heart and on his lips, Meir Green contends with being faithful to his ultra-Orthodox beliefs and his newfound fame and fan base.

At 20 years pf age, Meir Green felt on the verge of spiritual and internal collapse. He had just finished a tour of 12 different yeshivas in Israel, France, Switzerland and Canada, without finding a single one where he felt at home. He was soon to discover, though, that his true path included not just the musical notes of the prayer book, but also the music of his heart.

“From a very young age, I dreamed of music,” said Green. “But as an ultra-Orthodox guy I didn’t have a lot of opportunities to express it.”

He found himself less and less drawn to his rigorous yeshiva studies, so that by 17 he began to think there was something wrong with him. Which was why he decided to try a new path.

Accepting an offer as an instructor in an institution for young ultra-Orthodox men who had dropped out of the Haredi education system, Green began mentoring kids who came from the toughest parts of society. He taught them the importance of keeping Shabbat and why they should lay tefellin, and somewhere along the way he found inner peace.

“I was kind of a dropout myself,” admitted Green. “Just like my pupils. That’s why I connected to them so well.”

It was during his time with the boys under his care that Green’s first single “Ha’osher Haba” (The Next Happiness) came out, quickly becoming a smash hit in the ultra-Orthodox community. “The song tells our story,” said Green. “The story of young people: the kid fighting with his mother who takes a bag and runs away to live on the street, only to realize how pointless that is and ultimately discovers ‘the next happiness,’ just around the bend.”

Meir Green (Photo: Doron Edut)
Speaking about the ultra-Orthodox community, Green said he feels “Parents and educators don’t really know how to treat what they consider ‘wayward teens.’” He stressed that “The common feature for the 300–400 dropouts I dealt with is that they came from families that pressured them and didn’t give them the space they needed.”

After two years as an instructor and another hit single “Nekuda Shel Or” (Point of Light), inner strife within the institute he was working in led to conflict among the students themselves. When a young boy that Green had personally mentored raised a hand to him, Green went to his room and, with tears in his eyes, wrote “Lev Shavur” (Broken Heart).

“I realized I was lost again … At that moment, I realized that the job that saved me was now over.”

These days, Green is in a new yeshiva that allows him to also work on his music. “A lot of young boys who know my story still approach me on Facebook or Whatsapp, and I try to help them all through the night.” Among his musical endeavors is competing in the reality show “Ha’cochav Haba” (the Next Star), where Green quickly became a favorite for his version of Nadav Guedj’s “Golden Boy.” Despite his new yeshiva's general support for his music and the fact that Green did not break any Halachic law, his appearance on the show did not sit well with the yeshiva. Eventually, he decided to leave the show. Green sheepishly admited that many ultra-Orthodox girls flirt with him. “I respect them, and understand that it comes with the territory. I can’t hide the way I look and sound. Sometimes it can be hard, but I know it comes from love.”