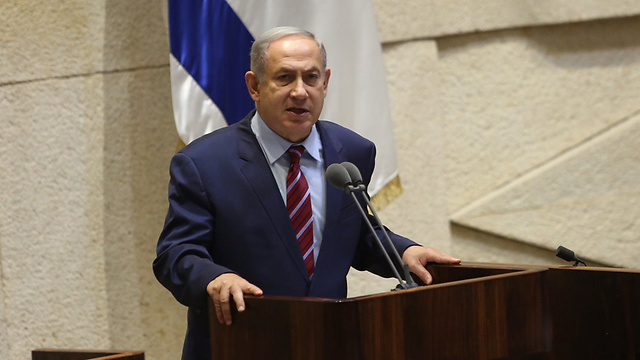 In special Knesset meeting marking 10 years since Second Lebanon War, the prime minister says the relative calm on the Lebanon border is a result of 'effective and continuous deterrence'; President Rivlin warns that 'Hezbollah continues to rearm itself and it has not ceased in its efforts to destroy Israel.'

Prime Minister Benjamin Netanyahu sought on Tuesday to send "a message to Israeli Arabs: We will respond to every aggression with force. No one will be immune."

The prime minister, who was speaking as Israel marked 10 years to the Second Lebanon War with a state ceremony on Mt. Herzl and a special Knesset meeting, asserted that the 2006 war was "a promo to the fight against the rise of radical Islam."

"We cannot separate the war we experienced a decade ago from the developments that preceded it and that followed it," he said.

"Hezbollah saw us as a weak country, lacking a strong backbone, with a society more feeble than a spider's web that was tired of fighting and defending itself," Netanyahu continued.

"But the war proved the exact opposite. For over a month we faced a combined campaign both on the front line and on the home front. The citizens of Israel showed strength and resilience, reservists were called to serve and showed up when called," he added.

On the other hand, the prime minister noted that "this was a war of hesitancy, with many difficulties, failings and shortcomings—both on the strategic level and in execution. The war exposed the lack of preparedness of many units and lack of fitness that damaged our ability to reach important objectives."

"Soon after the war, we had to pull up our sleeves and start remedying things. Many lessons have already been learned and implemented in the battle field, but the process continues to this very day," Netanyahu went on to say.

He stressed that the relative calm on the Lebanese border was conditioned on "effective and continuous deterrence."

Knesset Speaker Yuli Edelstein spoke of the lessons learned from that war, saying "We won't restore Israel's deterrence by always being dragged into war—we need to initiate."

The Knesset speaker asserted that Israel should get ahead of the enemy so “it wouldn’t be caught by surprise.”

“Our main challenge as a leadership is to restore the trust that was lost. The public wants to see its leadership take the initiative and not just reacting; managing and shaping reality, rather than adapting to existing reality.”

"The 'Second Lebanon War' has quickly turned into a negative brand, a synonym for chaos, failure, to a campaign that had no guiding hand,” Edelstein lamented. “A dark cloud of uncertainty hovered over the skies of Lebanon and Israel in the midst of the war, and it has not scattered for a long time afterwards."

"The deterrence reached in the Second Lebanon War is considerable," Opposition leader Isaac Herzog (Zionist Union) said. "Hezbollah are not as trigger happy as they were before. The organization knows we could exact a grave price for any attempt to harm our sovereignty."

And while the Second Lebanon War brought to light a lot of failings and shortcomings in the military and in the leadership, "it also had significant successes that shaped a reality of security that has remained since. The Israeli government at the time did not shirk off responsibility, knew how to initiate investigations about all of the failings."

Speaking at an earlier ceremony on Mt. Herzl, President Reuven Rivlin warned of the threat Hezbollah still poses Israel. "Hezbollah continues to rearm itself and it has not ceased in its efforts to destroy Israel," he said.

The Lebanese terror organization, he said, "received a severe blow during that battle. The State of Israel discouraged its opponents and in the last decade since the end the Second Lebanon War, but we must internalize the essence of the threat that we face, and listen at all times to the sounds of war bubbling beneath the deceptive calm."

President Rivlin at the Knesset (Photo: Gil Yohanan)
He described the Second Lebanon War as one "in which devotion to the goal, the camaraderie, determination, sacrifice, and dedication of the fighters and commanders covered the failures and flaws exposed in the levels of preparedness. A war in which heroism and fortitude defeated what was discovered lacking in the emergency stock-piles and equipment." At the same time, he praised the IDF and Israel's ability to comprehensively investigate the failings of the war and make the necessary changes to the military's level of preparedness. With that in mind, Rivlin added that "We know that the next war if forced upon us will be difficult, yet we will always have the upper-hand. We don’t have the privilege, to be unprepared, to be untrained, and to not see into the future." Prime Minister Netanyahu said at Mt. Herzl that the war "was a justified war in its goals. Despite the failings and shortcomings that came to light during the war, we invested and still invest a lot of effort into learning every possible lesson, and I would also say to continue implementing every possible lesson." The Second Lebanon War was fought between Israel and Hezbollah in the summer of 2006 in southern Lebanon and northern Israel, with 1.5 million Israelis under the threat of rockets. The war broke out on July 12 with a Hezbollah attack on an IDF force on the Israel-Lebanon border, during which three soldiers were killed and two others, who were also killed, were taken— Eldad Regev and Ehud Goldwasser. A ceasefire began on August 14, ending the war. During the war, 121 soldiers and 44 civilians were killed.