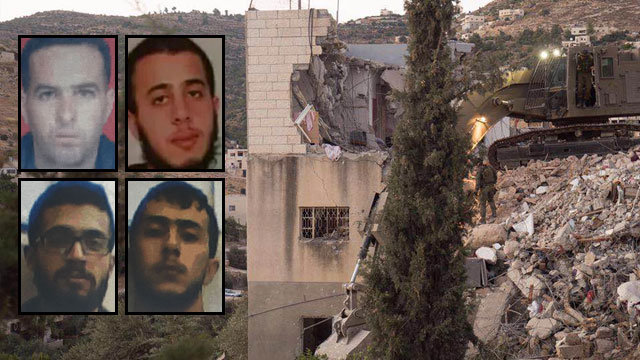 Israeli security forces capture three accomplices who helped Mohammed Fakih carry out the shooting attack in southern Mount Hebron that claimed Mark's life and left his wife and two of his children wounded.

The terrorist who murdered Rabbi Michael "Miki" Mark in a drive-by shooting earlier this month was killed in an IDF raid in the Hebron area overnight Tuesday, it was cleared for publication early Wednesday morning.

Mohammed Jabarah al-Fakih, a 29-year-old Hamas operative from Dura, barricaded himself in a house in the village of Surif in the Hebron area, ignoring calls by forces from the IDF's elite Duvdevan unit and Israel Police's counterterrorism unit Yamam to surrender.

After a firefight, the IDF troops fired and anti-tank missile and several other projectiles at the house, which caused a significant part of the structure to collapse. Forces then used a bulldozer that started demolishing the structure while the terrorist and others were hiding inside. In the pre-dawn hours, forces looking through the demolished house found the terrorist's body.

The forces also seized weapons that were in Fakih's possession, including a Kalashnikov rifle and a homemade grenade.

Troops from the Kfir Brigade's Haruv Battalion, who were providing backup to the raid, encountered violent rioting by other residents of the village, which they quelled using crowd dispersal measures. According to the Palestinians, the power to the village was cut during the night and gunfire and explosions were heard.

None of the Israeli troops, who left the village around 6am, were hurt in the raid. According to the IDF, one Palestinian woman was lightly wounded. Fakih’s family blame the Palestinian security forces who they say gave him up to the Israelis.

Fakih was imprisoned in the past for planning terror attacks along with others while he was a member of the terror organization Islamic Jihad. While in prison, he joined the ranks of Hamas's military wing, the Izz ad-Din al-Qassam Brigades.

Michael "Miki" Mark, 48, who was murdered on July 1 in a drive-by shooting attack near the settlement of Otniel in the southern Mount Hebron area of the West Bank, was the head of a religious-Zionist yeshiva in Otniel and the cousin for Mossad chief Yossi Cohen. Mark and his wife, Chava—who was seriously wounded in the attack—have 10 children, two of whom were also in the car at the time of the shooting: 15-year-old son Padya was lightly wounded while 13-year-old daughter Tehila suffered moderate-to-serious injuries.

After the attack, the IDF sent hundreds of troops to the area to search for the perpetrators in what was the largest operation in the territory in two years.

Three other terrorists also involved in the attack that claimed Mark's life have also been arrested recently, along with several of their family members.

Top: Mohammad Amaira and Mohammed Fakih. Bottom: Sahib Fakih, Muaz Fakih. Background: The house where terrorist Mohammed Fakih barricaded himself.
Among them was Mohammad Majid Amaira, 38, from Dura, who is a member of the Palestinian security forces. He was detained for questioning three days after the murder and confessed to serving as a driver during the attack, while Fakih was the one who fired the deadly shots at the Mark family car. After his interrogation, the Shin Bet seized the weapon and car used to carry out the attack. Fakih's brother, Sahib, was also arrested and confessed in his interrogation to aiding Mohammed Fakih hide and conceal weapons he had in his possession. A cousin of the two brothers, Muaz Fakih, was also arrested. He told interrogators that he provided Mohammed Fakih with a place to stay in the days following the attack. Other relatives who helped Fakih hide were also arrested on similar suspicions.