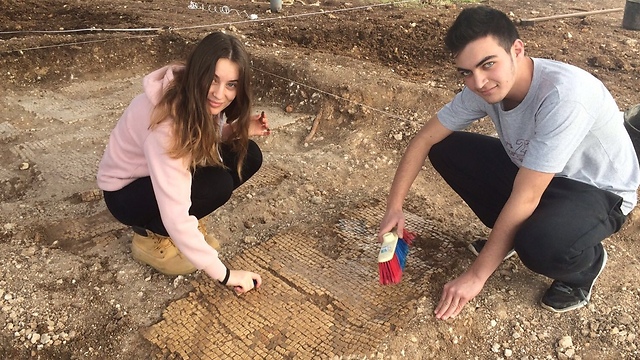 A 1,600 year old pottery kiln hewed out of the local rock has been discovered outside the western Galilee town of Shlomi; kiln was found by local high school students on a summer dig with the Israel Antiquities Authority.

“We have been conducting a large scale survey and excavations in the town of Shlomi at the request of the local municipal council and the Israel Lands Authority for the past six months,” IAA geologist Anastasia Shapiro told Tazpit Press Service (TPS). “We unearthed an impressive factory for the manufacturing of jars, urns, and various vessels as part of the project.”

According to Israeli law, IAA experts must conduct an archaeological survey of any construction site before issuing approval to begin building on it.

The pottery factory, which includes a unique kiln, storehouses, water basins, and mosaic floors, was dated by the IAA to the late Roman Period, roughly 1,600 years ago.

“The kiln, which was only recently discovered, is the ‘cherry on top’ for this excavation,” Shapiro explained to TPS. “As archaeologists, we have encountered many ancient kilns, but they were all built or constructed out of stone. This one, however, is the first to be discovered that was actually excavated into the rock.”

According to Shapiro, it is very rare to discover a complete kiln as they tend to break or be destroyed with time. In this case, the entire structure of the kiln has been preserved as it is made out of one piece of solid rock.

“There is no other known discovery like this. It is simply one of a kind,” said Shapiro.

IAA archaeologists also concluded that the pottery workshop itself was an important, thriving one. The ceramic debris that was discovered around the kiln indicates that two types of vessels were manufactured by the workshop–storage jars that could be transported overland and amphorae that were used to store wine or oil to be exported from Israel by sea.

The discovery was aided by a large group of high school students from neighboring communities and from the cities of Nahariya and Qiryat Bialik.

A part of the kiln uncovered in Shlomi (Photo: Courtesy)

“The students who volunteered on this project since May exposed the walls of the ancient workshop prior to the discovery of the kiln itself, as well as other features of the complex, such as water holes and mosaic floors,” explained Shapiro.

The students who assisted in the discovery were part of a large group of students who have been participating in archeological excavations in six different sites around the Galilee. The Ministry of Education has been encouraging Israeli teens to enhance their education outside of the classroom in order to increase student involvement in various public projects in neighboring communities.

“One can learn a lot during a history lesson in school, but there’s nothing like actually holding history in one’s hands,” Gilad Zinamon, an IAA education coordinator, told TPS.