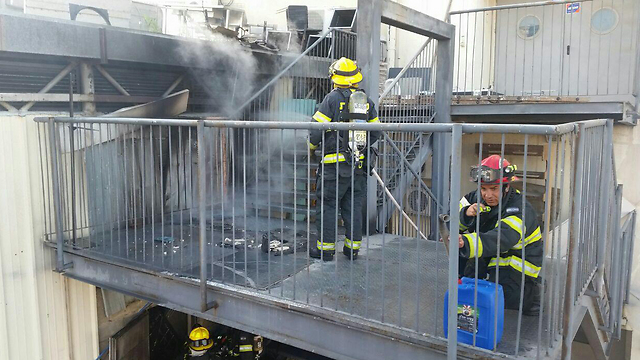 Jerusalem Police responded to a call Saturday morning reporting a fire at Haoman Street club. Following an initial inquiry, an investigator for the Firefighting and Rescue Commission ruled that the fire was the result of arson, and an investigation on the incident was opened. As the club is not operational on Saturday, no one was hurt.

Firefighters managed to contain the fire, keep it from spreading to nearby buildings and eventually to extinguish it within one hour. Preliminary evidence found that the fire was started by unidentified arsonists who had poured a large amount of flammable liquid into the club and lit it on fire.

Haoman Street is located at the spot where the legendary Jerusalem Club Haoman 17 originally stood. After Haoman Street was opened, a contentious legal battle began between its owners and Haoman 17's owners, who claimed that the new club's name was misleading and would likely make club goers mistakenly think that Haoman 17 had reopened in Jerusalem. Haoman 17's Tel Aviv branch is still operational.

Haoman Street's owner is Yaron Segev, a business partner of Jerusalem nightlife leader Guy Cohen, who had fled Israel after accumulating millions of shekels in debt.

A few hours prior, the well-known Eilat restaurant Eddie's Hideaway also caught fire. The incident is similarly being investigated as a result of arson, and one suspect has already been arrested. No one was hurt in the fire. Eddie's Hideaway has been active since 1979.

In a third, perhaps unrelated incident, the Neveh Tzedek home of noted Chef Chaim Cohen also caught fire. There were no injured parties, and the family dog was safely rescued by the firefighting team from the burning house. Cohen attributed the fire to "a ray of light that must have reached the dining room's many glass surfaces."