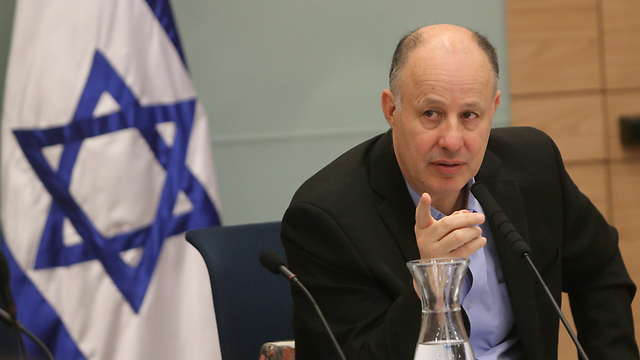 Minister Tzachi Hanegbi expressed further dismay at Obama's Friday statements hailing the Iran agreement as a success; 'There is no basis for calling it a success. President Obama's statements are inaccurate.'

Following statements voiced by the Defense Ministry of the Iran nuclear deal on Friday, in which its was compared to British Prime Minister’s appeasement policy and the 1938 signing of the Munich agreement with Hitler, government officials have continued to heap criticism on the deal. A minister in the Prime Minister’s Office Tzachi Hanegbi (Likud) claimed on Saturday that the US government’s hailing of the deal’s success thus far is totally unfounded. “There is no basis for the American government’s approach according to which the the full Iranian implementation of the nuclear agreement is indicative of its success,” Hanegbi said. “This is precisely the problem with the agreement: Iran has no reason to violate it during its validation period because it already serves all its purposes. Iran continues its regional subversion unabated. It arms and finances terror organizations and continues to advance its illicit production of ballistic missiles. Despite all this its economy enjoys the removal of sanctions and many countries investing in businesses in Iran,” he complained.

Tzachi Hanegbi (Photo: Alex Kolomoisky)
Hanegbi then went on to undermine the statements of President Barack Obama himself after the latter claimed that the deal has even garnered the support of many in the Israeli security establishment. “Even the statements made by President Obama about support by Israeli security officials for the agreement are inaccurate. The Israeli security establishment is aware of the fact that the agreement, if not violated, prevents the strengthening of Iran’s nuclear capacity for at least a decade. At the same time, all of our intelligence officials have stated that when the agreement expires Iran will be be free of all restrictions which were imposed upon it by the agreement, and will therefore stand on the brink of acquiring a nuclear weapon within a short space of time,” Hanegbi continued. “President Obama himself pointed out this possibility toward the signing of the agreement and this danger has not disappeared. Every day that passes brings us closer to this harsh reality that 10 years in human history passes in the blink of an eye.”

Hanegbi’s comments came a day after US President Barack Obama announced on Friday that the Iran nuclear agreement is working exactly as planned, and stated that Israel itself acknowledges the fact that Iran is holding to its part of the agreement.

The response continued, saying "the Munich agreement didn't stop World War Two or the Holocaust. (The agreement's -ed) basic premise - that Nazi Germany could be a partner in some form of agreement – was wrong, and world leaders at the time ignored Hitler's and other Nazi leaders' blunt remarks (regarding the Jews -ed)."

"This is the same regarding the agreement with Iran, which itself explicitly and publicly announces that its goal is to destroy the state of Israel. A US State Department document published this year states that Iran is the chief state sponsor of terror world wide," the response said. "Therefore, the Israeli security establishment, the nation of Israel, and many other nations around the world, understand that agreements like those signed between the world super powers and Iran aren't helpful. They only damage the uncompromising struggle against nations which support terror."

After the Ministry of Defense sent it's statement, the Prime Minster's Office sent a softer reply, saying "Israel's position on the Iran Nuclear Deal remains as it was. However, Prime Minister Netanyahu still believes that Israel has no greater ally than the United States. As Netanyahu said in his UN speech last year, it's important that those who were for the agreement and those who were against it cooperate to fulfill three goals; to make sure that Iran doesn't violate the agreement, to deal with Iran's regional aggression, and to dismantle Iran's global terror network. The prime minister expects these goals to become part of shared policies, and that the alliance between the US and Israel only grow stronger not only with President Obama, but also with his successor."

Obama's statements came after the Iranian leadership expressed disappointment with the agreement on Tuesday, a fact which some have suggested are manifestations of the first cracks in Iranian trust in their agreement. Iranian leader Ali Khomeini said that the average Iranian hasn't seen the benefits they had hoped to see following the agreement.