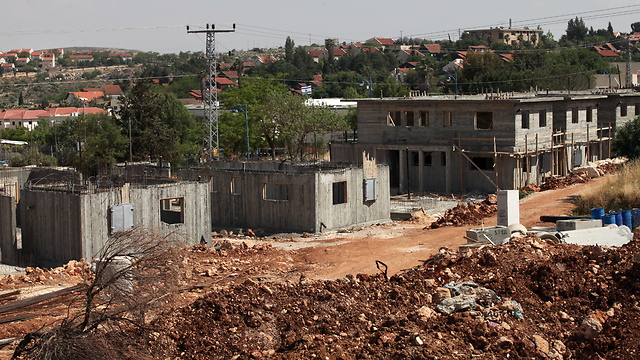 Gov't admits to Supreme Court it mistakenly expropriated more than 11 acres of Palestinian land in the middle of the settlement of Ofra, leading both sides to demand gov't to resolve the issue.

In a rare event, the Israeli government has admitted to the Supreme Court that it mistakenly expropriated more than 11 acres of private Palestinian land in Ofra, a Jewish settlement built on land Israel captured in 1967. At least nine homes have been built on this land, and Palestinian lawyers say the land must be returned to its owners. “We are asking the Israeli government to destroy the houses of the settlers which were built on this land, to evacuate the land and to give it back to the Palestinians,” Tawfiq Jabarin, a lawyer representing the Palestinian families who claim the land told The Media Line. Ofra was started in 1975 and today an estimated 3,500 Israelis live there. About halfway between Ramallah and Nablus, it is in the heart of the West Bank. The piece of land under contention now was originally confiscated by Jordan for use as an army camp in 1966. When Israel captured the area, it declared it “state land,” in order to legalize the building of Ofra. But Israel went beyond the boundaries of the original Jordanian confiscation, causing the mistake the state has now admitted.

Construction in the settlement of Ofra (Photo: Amit Shabi)
In 2011, Palestinians petitioned the Supreme Court against Ofra’s new master zoning plan, saying they owned part of the land it includes. The state this week admitted that it had erroneously expropriated the 11 acres. Residents say that as it was the government’s mistake, it’s up to the government to fix it. In any case, the disputed land is right in the center of the community, which would make it impossible to leave. “Our expectation is for the government to get out of this problem and to authorize this area,” Miri Ovadiah, a spokeswoman for the Mateh Binyamin Regional Council, which includes Ofra, told The Media Line. “If compensation needs to be granted, the government should do that too.” She said there are nine homes built on the piece of land in question, while lawyer Tawfiq Jabareen said aerial photos show 60 buildings on the land, including several public buildings like schools. Ovadiah says she does not believe that the Palestinian owners have proper documents to prove their ownership.

Israeli left-wing activist Dror Etkes, who has filed several of the petitions in the Amona case, says the state decision does not go far enough.

Construction in the settlement of Ofra (Photo: Amit Shabi)
“About two-thirds of Ofra is built on private Palestinian property outside the original land confiscation for a military camp,” Etkes told The Media Line. “The only part they can legalize is the land from the Jordanian confiscation, which is about one-third of the land of Ofra.” The case in Ofra shows the complexity over land claims in the West Bank. Israel has not annexed the West Bank, but has been in control for almost 50 years. Today, an estimated 370,000 Israelis live in the West Bank, along with 200,000 in East Jerusalem. The Israeli government says that East Jerusalem, which it annexed in 1967, must remain the undivided sovereign capital of Israel. Palestinians say the entire West Bank and Gaza Strip, with it’s over 4 million Palestinians, along with East Jerusalem, must become the Palestinian state.

Also in Ofra is the outpost of Amona, which Jewish residents call a “neighborhood.” Built on a hill overlooking Ofra in 1995, and today with about 200 Israelis living there, the Supreme Court has ruled it was built on private Palestinian land, and is illegal according to Israeli law. The Israeli government continues to fight the court’s eviction order and one attempt to evict the residents ended in violence.

Etkes says there is a precedent for dismantling settlements. In 2005, Israel decided to pull out of the Gaza Strip, and 9,000 Israelis were forced to leave their homes in Gaza. If the homes in Ofra are built on Palestinian land, he says, the government should demolish these homes as well and return the land to the original owners.