Menachem Begin was the head of the Irgun 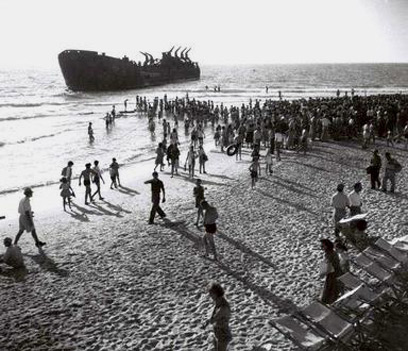 Despite officially joining the IDF and obtaining senior roles in the Israeli government, five of the Irgun heads who were arrested for treason in 1948 following the Altalena Affair were finally officially exonerated by IDF Chief of Staff Gadi Eisenkot.

The office of the IDF Chief of Staff, in an unprecedented step, has cancelled the treason charges of five Irgun members over their involvement in the Altalena Affair. The charges were included in an affidavit given to the High Court of Justice and were overturned after research carried out by the IDF History Department. The Altalena Affair occurred 68 years ago when in June 1948, during the first internationally brokered ceasefire during the War of Independence, a ship loaded with weapons and Irgun fighters approached the shores of Tel Aviv. The Irgun, which was originally founded as an underground militia fighting the British, was by that time partially incorporated into the IDF.

The Altalena beached off the coast of Tel Aviv (Photo: Teddy Brauner)
David Ben-Gurion, who was the prime minister and defense minister, ordered the crew of the ship to dock at the Kfar Vitkin Beach north of the city of Netanya. The weapons on the ship were destined for Irgun fighters, fighters who had not incorporated themselves into the IDF nor pledged allegiance to the State of Israel. Other pre-IDF military groups, such as the Hagana and the Palmach, joined Ben-Gurion and kept the weapons in their possession. As part of the negotiation process for the Irgun to join the IDF, the group requested that it be allowed to keep its weapons, something which the IDF refused. At Kfar Vitkin, the Irgun unloaded the majority of its weapons, and the most of the Irgun members aboard the Altalena went on to be drafted into the IDF. However, Irgun leader Menachim Begin refused to hand over the remaining weapons on the ship, claiming they were for the Irgun units which had yet to incorporate into the IDF. Ben-Gurion's government then issued a statement saying that if Begin refused to hand over the weapons, the prime minister would use the IDF to forcibly take over the weapons and the ship. There was then a firefight between the Irgun members and the IDF forces, with the IDF losing two men, and the Irgun losing six. The ship meanwhile set sail for Tel Aviv, a city with many more Irgun supporters.

The affair was brought to a close off the coast of Tel Aviv, when the Israeli Navy shot and disabled the Altalena. In all, 16 Irgun members died along with three IDF soldiers.

The Altalena burns off the Tel Aviv coast as Irgun and IDF soldiers fight (Photo: Hans Chaim Pinn)
Ben-Gurion ordered the operation come to a swift end. Once the ship was beached at Bograshov beach, Palmach commandos—led by Yitzhak Rabin—were ordered to board the ship and arrest Menachem Begin. Heavy fighting erupted between Irgun members and the IDF, enabling Begin to slip away in the middle of the night to a clandestine Irgun radio station in Tel Aviv. From there, Begin made an announcement to his Irgun soldiers, telling them to stop fighting the IDF to prevent a Jewish civil war from starting. The IDF initiated a massive wave of arrests of Irgun members who refused to comply. Most of them were later released, but five Irgun commanders were not; Ya'akov Meridor, Begin's deputy; Eliyahu Lincoln, commander of the Altalena; Hillel Kook, head of the Irgun lobby in the US who purchased the ship; Betzalel Amitzor, a member of the Irgun Chief of Staff and in charge of negotiations for Irgun incorporation into the IDF; and Moshe Hasson, head of Irgun units in the Shomron region. The five were secretly arrested and sent to a detention facility in Beit She'an. Their military lawyers—Max Zligman and Maks Krichman—filed a suit to the High Court of Justice to convene a legal panel to argue their case. The IDF chief of staff at the time, Ya'akov David, who was too sick to leave his bed, was instead represented by Deputy IDF Chief of Staff General Ayalon. The general said that "the IDF Chief of Staff is of the opinion that the case should be moved to a criminal court with the charge of treason."

The Altalena burning off the Tel Aviv coast (Photo: National Archives)
Yet the indictment didn't happen since, according to the statements by the actual IDF Chief of Staff, he decided to "keep the men in custody until conditions are suitable for their release."

As they were sitting in jail, two of the Irgun prisoners were visited by Isser Harel, an advisor to Prime Minister Ben-Gurion. He told them that if "you join the IDF, you will receive high-ranking positions which fit your status and qualifications." Harel explained that he had express permission from Ben-Gurion to tell them this, and a short while later, the five were released.