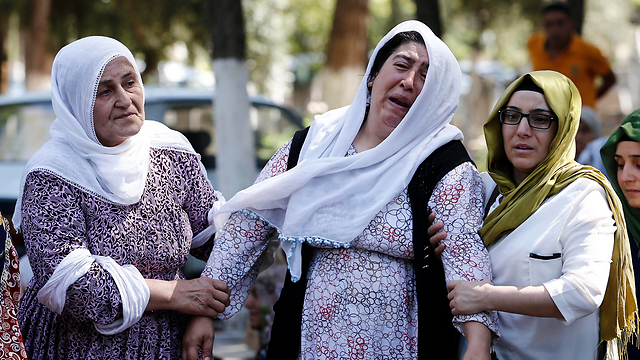 The death toll from a terror attack at a wedding in southeastern Turkey has risen to 51; President Erdoğan has blamed ISIS militants for carrying out the attack.

At least 51 people were killed on Saturday when a suspected suicide bomber detonated his explosives among a group of people dancing on the street at a wedding party in the Turkish city of Gaziantep, about 40 km from the Syrian border.

President Recep Tayyip Erdoğan said it was likely that ISIS militants carried out the late-night attack, the deadliest bombing this year in Turkey, which faces threats from militants at home and from Syria.

ISIS has been blamed for other attacks in Turkey, often targeting Kurdish gatherings in an effort to inflame ethnic tensions. The deadliest attack having been last October at a rally of pro-Kurdish and labor activists in Ankara when suicide bombers killed more than 100 people.

According to local officials, Saturday's wedding party was for a member of the pro-Kurdish Peoples' Democratic Party and the groom was among those injured. The bride was not hurt, the official added.

Celebrations were ending at the traditional henna night party, when guests have decorative paint applied to their hands and feet. Some families had already left when the bomb went off, but women and children were among the dead, witnesses said.

Blood and burns marked the walls of the narrow lane where the blast occurred. Women in white and checkered scarves cried, sitting outside the morgue waiting for word on missing relatives.

Projectiles from the bomb (Photo: AFP)

"The celebrations were coming to an end and there was a big explosion among people dancing," said 25-year-old Veli Can. "There was blood and body parts everywhere."

The local governor's office said in a statement 51 people were killed in the bombing, and more wounded were still being treated in hospitals around the province.

"We want to end these massacres," witness Ibrahim Ozdemir said. "We are in pain, especially the women and children."

Hundreds gathered for funerals on Sunday, some weeping at coffins draped in the green color of Islam, local television images showed. But other funerals would have to wait because many of the victims were injured beyond recognition and DNA forensics tests would be needed to identify them, security sources said.

Funeral of one of the victims (Photo: EPA)

In Gaziantep, the chief prosecutor's office said they had found a destroyed suicide vest at the blast site.

Violence has also flared again this week in the largely Kurdish southeast. Ten people were killed in bomb attacks, mostly police and soldiers, in an escalation that officials blamed on the PKK.

Turkey began air strikes against ISIS last July, in the weeks following the collapse of a peace agreement with the PKK, whom Turkey also began targeting in northern Iraq.

Just a half an hour away from Gaziantep is the border town of Kilis, which has been repeatedly hit by rockets and shelling from ISIS territory, occasionally wounding and killing civilians.

On Sunday, ruling AK Party lawmakers, as well as Erdoğan himself, emphasized that they see ISIS as no different than the Kurdish separatist PKK and the group led by Gülen, all three classified by Turkey as terrorist organizations.