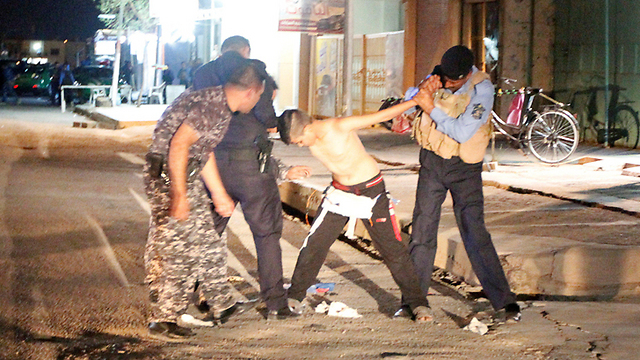 In Iraq, Nigeria and now Turkey, child bombers strike; the growing trend of Islamic terrorists to exploit children to serve their murderous purposes.

Istanbul — The boy looked scared and younger than 16 when Iraqi police grabbed him on the street in the northern city of Kirkuk. Pulling off his shirt, they found a two-kilogram bomb strapped to his skinny frame.

That was last Sunday. Less than a day earlier, Turkey was less fortunate: a teenage bomber detonated his suicide vest among dancing guests at a Turkish wedding party, officials say, killing 51 people, nearly half of them children themselves.
Iraqi police cutting off explosive belt
X

Saturday's attack at the wedding in Gaziantep marked not only Turkey's deadliest this year, but also the first time in Turkey that militants may have deployed a child bomber in a way already used to deadly effect in wars from Africa to Syria. In Afghanistan, the Taliban has long used children. One 14-year-old bomber on a bicycle hit the Kabul NATO base in 2012 killing six people; two years later a teenager blew himself up at French cultural center in the Afghan capital.

In West Africa, Boko Haram has preyed on displaced children or young girls it kidnapped to force them to become bombers. In Iraq and Syria, activists say ISIS took in children from towns it captures or recruited families to its territory, and indoctrinated their children in its schools and camps.

The boy having an explosives belt cut off of him (Photo: Reuters)
ISIS in particular, highlights its child recruits for its "Cubs of the Caliphate" brigades, publishing images and videos on social media of children receiving training and indoctrination, and carrying out bombings or executions. "Child recruitment across the region is increasing," said Juliette Touma, a UNICEF regional spokesperson. "Children are taking a much more active role ..., receiving training on the use of heavy weapons, manning checkpoints on the front lines, being used as snipers and in extreme cases being used as suicide bombers." Little has been publicly released about the attacker in the Gaziantep bombing. Turkish President Recep Tayyip Erdoğan said on Sunday that the bomber was between 12 to 14 years old, and said ISIS was probably responsible. The blast tore into celebrations at a Kurdish wedding on the street late at night. As many as 22 of the dead were under the age of 14. No one claimed the attack, but ISIS in the past has targeted Kurdish gatherings to stir ethnic tensions.

Mourners after wedding attack (Photo: EPA)
Turkey's prime minister was more cautious on Monday, saying it was too early to say who carried out the attack, though security sources say witnesses reported the bomber was a child. Turkish authorities are also investigating whether militants may have placed the explosives on the suspect, without his or her knowledge before detonating them long distance. That tactic has been used before in Iraq, where children or even mentally disadvantaged adults have been dispatched as unwitting bomb couriers into markets and checkpoints before they are blown up from afar.

In the failed attack in the northern Iraqi city of Kirkuk a day later, local television images and photographs showed the boy crying and screaming as he was grabbed by Iraqi security forces near an interior ministry building.

Security officials said the boy is 16 years old, though local media reports said he was much younger. He is an Iraqi national from Mosul, the largest urban center still under militant control, which Iraqi and Kurdish Peshmerga forces backed by US air strikes are moving to liberate. Hisham al-Hashimi, an analyst and author who advises the Iraqi government on ISIS, says militants this year had reactivated their Heaven's Youth Brigade, in reaction to the group's battlefield losses in Iraq and Syria. "Teenagers are easier to recruit for suicide missions, especially in moments of suffering or despair having lost loved ones," he said. "They also attract less attention and less suspicion than male adults." Child recruits who have escaped from ISIS ranks in its base in Syria's Raqaa have described how they were taught to handle weapons, and also how to detonate suicide belts. A study in February for Combating Terrorism Center at West Point military academy that examined ISIS propaganda on child and youth 'martyrs' between January 2015 and 2016, found three times as many suicide operations involving children over the year.

Funeral for victim of wedding attack (Photo: AFP)
"They represent an effective form of psychological warfare—to project strength, pierce defenses, and strike fear into enemy soldiers' hearts," the study said. "ISIS is mobilizing children and youth at an alarming rate." Those tactics are mirrored in West Africa where UN officials have tracked a rise in attacks like the one carried out by a girl as young as ten who last year exploded a bomb in a busy market place in the Nigerian city of Maiduguri, killing 16 people. Security sources at the time said the explosive device was wrapped around her body. In an April report, UNICEF said attacks involving child suicide bombers between 2014 and this year rose four-fold in northeastern Nigeria, where militant group Boko Haram is based, and neighboring Cameroon, Niger and Chad. A 12-year-old Nigerian girl captured with explosives in Cameroon in March told police she had been abducted by Boko Haram after the group overran her village a year earlier. According to the UNICEF report, nearly two thirds of all the child attackers they tracked were girls. In the first six months of this year alone, UNICEF says it has also noted 38 child suicide bombers in West Africa. "This is one of the defining features of this conflict," said Thierry Delvigne-Jean of the agency's west and central Africa office.