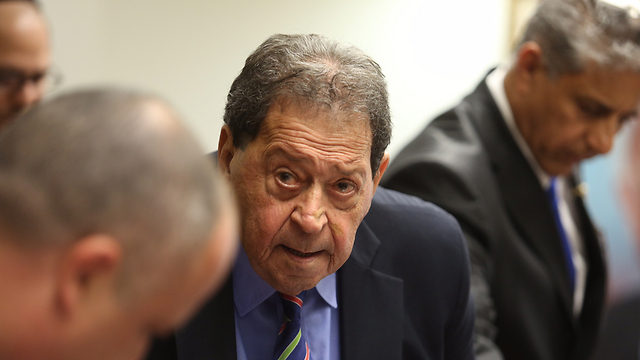 Former Minister Ben Eliezer, who served as the Coordinator of Government Activities in the Territories, Defense Minister, and Deputy prime Minister amongst other positions, passed away on Sunday at Asaf Harofeh Medical Center outside of Rishon LeZion.

Former Minister Benjamin Fuad Ben-Eliezer died on Sunday at the age of 80. He was one of Israel's most prominent and respected politicians for the past 30 years, and held various positions such as defense minister and deputy prime minister. The politician was hospitalized two weeks ago at the intensive care unit of Asaf Harofe medical center outside of Rishon LeZion, and was transferred to the heart center of the hospital following evidence of a heart condition.

Benjamin Fuad Ben Eliezer was born in Basra, Iraq in 1936, and immigrated to Israel in 1950 when he was 14 years old. He joined the IDF in 1954 at the age of 18 to the Golani brigade where he became an officer. He was the commander of the Shaked Unit, which operated in the Southern Command. A year later, he was injured when the Jordanian military attacked a helicopter he was flying in.

He retired from the IDF in 1982, but was called back into service by then Defense Minister Moshe Arens. He served as the Coordinator of Government Activities (COGAT) in the West Bank and Gaza, until his final release from the military in 1984 at the rank of brigadier general.

Ben-Eliezer established a new political party called "Yahad" with Ezer Weitzman in 1984. He served on the Foreign Affairs and Defense Committee following the elections, and then was appointed to be the Housing and Construction Minister under Yitzhak Rabin. In 1994, Ben Eliezer went on an official delegation with Rabin to Tunesia, where he became the first Israeli minister to ever meet with PLO Chairman Yasser Arafat.

He became deputy prime minister to Ehud Barak in 1999, and also served as communications minister. He then served again as Minister of Housing and Construction.

After Barak lost the 2001 elections to Ariel Sharon, Ben-Eliezer was chosen to be minister of defense. The security fence in the West Bank was built under his watch.

In 2005, Ariel Sharon chose Benjamin Fuad Ben-Eliezer to be the minister of national infrastructure in 2005. After a brief break, he returned to the position under Ehud Olmert's premiership.

He contracted pneumonia in March 2011 and was put into a medically induced coma, eventually making a full recovery. He was re-elected in the 2013 elections, but resigned from the Knesset for health reasons in December 2014, and was replaced by Raleb Majadele.

Ben-Eliezer continued in public service and was elected to the Knesset again in January 2013. Amongst other things, he was a member of the Foreign Affairs and Defense Committee. In 2014 he was the Labor party candidate for President, but resigned from politics following a police investigation. He claimed that "it seems someone tried to politically assassinate me."

An indictment was filed against him in 2015 on charges of bribery, money laundering, fraud, breach of trust, and tax evasion. The prosecution claimed that he received a $400,000 bribe when he was the Trade and Industry minister, and NIS500,000 in order to buy a home.

Former Defense Minister Moshe Ya'alon mourned Ben-Eliezer, saying "(Ben-Eliezer) symbolized the ingathering of the exiles in their own land. In every position he filled on the battlefield, Fuad was a leader with a cool head and full of initiative, but above all he was a man amongst men. He always knew how to be sensitive and attentive, warm and loving, and his door was always open. I served underneath Fuad when he was the defense minister I was deputy IDF chief of staff and IDF chief of staff. In his days as defense minister, the IDF fought against raging Palestinian terrorism. We hit them, and began to change the reality on the ground, bringing about a relative calm, something which we still feel today. Everyone who met Fuad fell in love with him immediately. His warmth crossed sectors, ethnic groups, and religions. May his memory be a blessing.