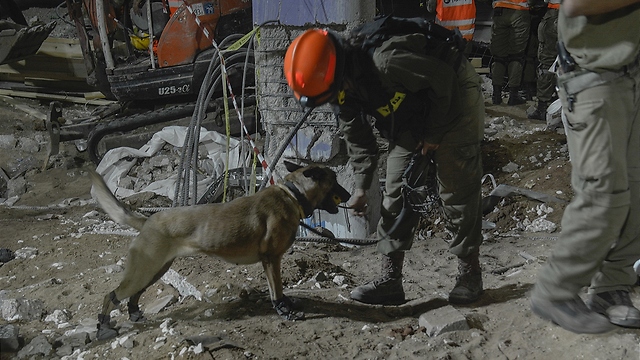 With the rescue teams at the collapse site

The firefighters were first on the scene, in the first hour pulling out six people from the wreckage of the collapsed construction site in Tel Aviv; alongside them worked three female soldiers from the Home Front Command: 'We were digging with our hands.'

More than 80 stairs separate the upper and lower floors of the construction site that collapsed on Monday. We're going deep into the ground, with hundreds of soldiers and rescue personnel all around us and the noise of drilling coming from every corner. Small bulldozers are clearing away the wreckage, while massive cranes move overhead, clearing the bags of debris from the site.

"It'll take us 24 hours of work to clear everything from here," an officer from the IDF's Home Front Command estimates. "There might be air pockets, we've found a few of those already, but since this is a four-story building that collapsed, the chances are not very good. Despite that, we remain optimistic and we're hoping to find someone alive. As far as we're concerned, as long as we don't have any other way of knowing—they're still alive. We're doing everything to get to them and we don't give up on anyone."

Rescue workers searching through the wreckage

The sights below are horrifying. Dogs from the IDF's Oketz unit are wandering around the wreckage, trying to catch the smell of people who might be trapped below the debris. Every now and again, the teams stop the work of the noisy bulldozers and drills, trying to listen for any sounds or signs of life—so far unsuccessfully.

Rescue worker with one of the dogs searching through the rubble (Photo: IDF Spokesman)
As people enter and leave the collapse site, they check in with a man carrying a clipboard. He makes a list of everyone below the wreckage to ensure everyone comes back out.

"Mind the step," says the guy making the list of the comings and goings. "We don't want you to get hurt here of all places."

The collapsed construction site (Photo: Motti Kimchi)
Firefighters are working tirelessly in search of survivors. "The forces arrived at the scene of the collapse within a minute and realized this was a large-scale event," says fireman officer Doron Netanel, the commander of the Tel Aviv District fire station. "When I got there, I saw a 15—20 meters wide crater with sand on its upper part, and I knew there were people trapped (below) and that their chances of survival were not high—because as soon as one ceiling collapses on top of the other, there aren't too many air pockets." Netanel recounts the first critical moments, "I was first down into the crater, because at first everyone were looking from above and reporting back. As someone who has been serving in Search and Rescue for 30 years, I knew I was experienced enough to know what to do."

Home Front Command rescue workers at the scene of the collapse
At a certain point, Netanel and his men spotted two stunned-looking workers sitting inside the crater, lightly injured. The officer decided to get to them and from there make his way to the minus-four floor, where the main section collapsed entirely, and where voices of people trapped were eminating from. "You have to understand that there's a risk in going down into a place like that. It's unstable ground and additional collapses are a possibility. I spotted two workers trapped between parts of the ceiling leaning diagonally against each other. The two workers were close together. For half an hour, I held their hands, spoke to them with the little Arabic I know, and told them we were going to extract them and evacuate them," Netael says.

Oketz Unit dog searching for surivors under the wreckage (Photo: Motti Kimchi)
The firefighters instructed the trapped workers to remain as calm as possible and to preserve their strength. The rescuers explained to the Arabic-speaking workers in their language that they were working on getting them out. "They were frightened. We asked them if they knew of other people who might be trapped near them. They said yes. Later we found out the two who were next to them were killed," Netanel says.

Home Front Command rescue workers at the scene of the collapse (Photo: Motti Kimchi)
The firefighters were able to extract six people during the first critical hour, and their quick work at the site helped the other rescue forces working in the complex scene.

"We were all touched by the fact we were able to save lives. We, as firefighters, know how to get to every scene and emotionally disconnect. We come focused on what we have to do and work with hammers, jackhammers and buzzsaws. When we rescued the workers they wanted to shake our hand," Netael says.

Also working on the scene were soldiers from the Home Front Commander's Search and Rescue Unit who just finished a week of training, with one of the scenarios they drilled being extracting people trapped in collapsed buildings.

Rescue workers looking for people under the wreckage
X

Rescue workers looking for people under the wreckage

Among them were three female soldiers—Sgt. Keren Tirosh from Rosh HaAyin, Cpl. Keren Riechter from Netanya and Sgt. Irit Muaysiev from Kibbutz Geva. This was their first large-scale event as rescuers.

"This is what you call a 'pancake collapse,' meaning four floors collapsing one on top of the other," explains Riechter. "In this sort of situation, it takes a long time to get to the person trapped. It's hardest on me, mentally, knowing it would take a long time and that there are people down there. It's the most frustrating thing when you're digging and digging and not finding anyone—because you know there's someone there who is just not where you are."

According to Tirosh, "You have to be prepared for everything. You don't know if you'll find a person still alive, or if the ground is going to collapse again under you."

"We were digging with our hands," recounts Muaysiev.

The digging is done in teams of ten, with every team covering an area of 1-3 meters. Most of the rescuers are men.

"There are a lot of rescuers on an area that appears small, but each and every one of us is needed," Riechter says.

According to Tirosh, who is in command of the team, "Everyone always says 'This won't happen to us,' but now the team is using everything it learned."

They're all focused on trying to save people who may still be trapped under the wreckage. "What we want most right now is to get a person out of there."