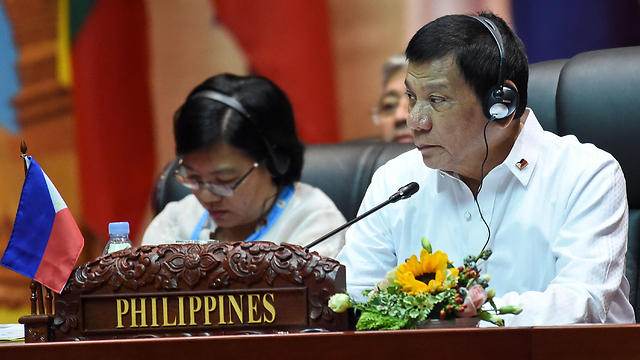 Philippines scrambles to soothe tensions after insult to Obama

Filipino President Rodrigo Duterte is in hot water after calling the US president a 'son of a bitch' and US ambassador to the Philippines a 'gay son of a whore' ahead of an ASEAN summit meeting in Laos.

VIENTIANE - The Philippines scrambled to defuse a row with the United States on Tuesday. Its new president, Rodrigo Duterte, voiced regret for calling President Barack Obama a "son of a bitch"—comments that prompted Washington to call off a bilateral meeting.

The tiff between the two allies overshadowed the opening of a summit of East and Southeast Asian nations in Laos.

It also soured Obama's last swing as president through a region he has tried to make a focus of US foreign policy, a strategy widely seen as a response to China's economic and military muscle-flexing.

He said in a speech as the summit got under way that his push to make the United States a key player in Asia-Pacific was not some "passing fad".

However, diplomats say strains with longtime ally the Philippines could compound Washington's difficulties in forging a united front with Southeast Asian partners on the geostrategic jostle with Beijing over the South China Sea.

Duterte has bristled repeatedly at criticism over his "war on drugs", which has killed about 2,400 people since he took office two months ago, and on Monday said it would be "rude" for Obama to raise the question of human rights when they met.

Such a conversation, Duterte told reporters, would prompt him to curse at Obama, using a Filipino phrase "putang ina" which can mean "son of a bitch" or "son of a whore".

After Washington called off Tuesday's bilateral meeting between Obama and Duterte in response, the Philippines issued two statements expressing regret.

"President Duterte explained that the press reports that President Obama would 'lecture' him on extrajudicial killings led to his strong comments, which in turn elicited concern," the Philippines government said in one statement.

US President Barak Obama at the ASEAN conference in Laos (Photo: EPA)

"He regrets that his remarks to the press have caused much controversy," it added. "He expressed his deep regard and affinity for President Obama and for the enduring partnership between our nations."

The White House had earlier said Obama would not pull any punches on his concerns about human rights abuses in the Philippines, its treaty ally, when meeting Duterte.

Instead of the Duterte meeting, Obama plans to hold talks with South Korean President Park Geun-hye, said Ned Price, spokesman for the White House National Security Council—a meeting where the response to North Korea's latest missile tests is expected to be on the agenda.

A Philippines official who declined to be named said there would be no formal meeting rescheduled in Laos but a short 'pull-aside' conversation between the two presidents was still possible.

Obama arrived in the city of Vientiane late on Monday for the first visit by a sitting US president to Laos, where he wants to begin to address the legacy of US bombing during the Vietnam War.

He announced on Tuesday that Washington would provide an additional $90 million over the next three years to help Laos—heavily bombed during the Vietnam War—clear unexploded ordnance which has killed or wounded more than 20,000 people.

However, the unusually open tensions between the United States and the Philippines, its former colony, threaten to overshadow the Association of Southeast Asian Nations (ASEAN) and East Asia Summits in Laos, running from Tuesday to Thursday.

Duterte won the presidency in May on the promise to suppressing crime and wiping out drugs and drug dealers.

About 900 people linked to drugs have been killed in police operations since July 1 and a further 1,500 have been classed as "deaths under investigation", a term human rights activists in the Philippines say is a euphemism for extrajudicial killings.

Duterte has repeatedly poured scorn on critics, usually larding it with curses.

He lambasted the United Nations after it criticized the surge in killings, and turned down a meeting with UN Secretary General Ban Ki-moon at the Laos summit.

In May, he called Pope Francis a "son of a whore", although he later apologized, and called US Ambassador Philip Goldberg a "gay son of a whore".

Duterte met the leaders of Singapore, Japan and Vietnam on Tuesday.

Manila has been aligned with the United States in its dispute with China over the South China Sea, in which Washington blames Beijing for militarizing a vital global trade route and jeopardizing freedom of movement at sea and in the air.

China rejects those accusations and accuses the United States of ratcheting up tensions unnecessarily. China claims most of the South China Sea, through which more than $5 trillion of trade moves annually. Brunei, Malaysia, the Philippines, Taiwan and Vietnam have rival claims.

An arbitration court in The Hague in July invalidated China's territorial claims after a case was brought by the Philippines, a ruling Beijing refuses to recognize.

Duterte said last month he expected all ASEAN members to support the arbitration court's ruling, but that the Philippines would not raise the issue in Laos.