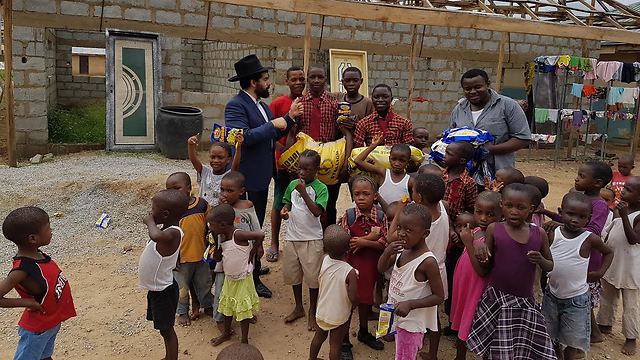 In Nigeria, Chabad House is not for Jews only

Between conducting Passover Seders and providing Jewish education, the Hasidic organization's only emissary in central Africa has been busy building a boarding school for children with special needs and providing baby food to Muslim refugees. 'It's a Jewish value to help whoever needs help, regardless of their religion,' says Rabbi Israel Uzon.

From an "embassy" helping Jews, the Chabad House in Nigeria—the only one of its kind in central Africa—has become a ray of light for local Africans. In a country torn by terror attacks and a deep interreligious rift, the Jews have become a moderating element helping both sides. Between conducting Passover seders and providing Jewish education, the local Chabad House has been busy building a boarding school for children with special needs and providing baby food to Muslim refugees.

Nigerian children. 'It's a country of believers. They see the 'chosen people' as very special people. It's part of their Christian tradition, so they are very excited about it.' (Photo: Israel Uzon)
Three years ago, Rabbi Israel Uzon founded the Chabad branch known to every Jew in Nigeria in a bid to help mostly Israeli businessmen and families residing in the country for short periods for business purposes. He first discovered Africa as a young man. The French-born rabbi would arrive in neighboring Congo to conduct a Passover seder for Jewish businessmen. "There was no need to open a Chabad House in central Africa at the time, as there were no Jewish communities in the area," he says. "Chabad's activity there focused on helping businessmen who found themselves in the country during the holidays. That is how I began hosting seders in Congo, Ivory Coast and Guinea, and that is how I reached Nigeria as well and found myself there more and more."

What is a Hasid doing in Nigeria?

Uzon became very attached to the local community of businesspeople who settled in the country for short periods of time, but his marriage interrupted the series of visits.

"I got married, and they asked why I wasn't coming anymore. I said it had become complicated. It's third-world conditions, with all that it implies," the rabbi says, referring to the difficult sanitation conditions and infrastructure which challenge every Western person used to a much higher standard of living. "We finally arrived for one holiday, and my wife kept wanting to come back. Slowly, she also developed a good relationship with the Israeli group."

A special-needs child in Nigeria. 'There is a local belief that they are possessed by an evil spirit.' (Photo: Israel Uzon)

At first, the couple only arrived for the holidays, until three years ago the family decided to move to Nigeria. "We connected to the people," Uzon explains the move, which was not easy. "I realized that every time I go, there is nothing the next day, so we said to ourselves that we should perhaps consider it seriously, and eventually we went there.

"The goal was to help the Jewish community there, which is mostly made up of Israelis, as regularly as possible. Forty percent of them are in Lagos, 40% in Abuja, the capital, and the other 20% are scattered across the country." Uzon says that at first he devoted most of this activity to creating a community from the hundreds of Israelis in the country. "We mainly invested in education, opening a 'Sunday school' for children studying at the American school in Abuja, and today we already have a regular Israeli school for the community's children. Last Passover, we held five seders in different centers across the country. Today we are based in five to six different cities in the country and we have good relations with the locals."

No driving out 'evil spirits'

So far, it all sounds like routine Chabad House activity, but here things take a less familiar turn. The idea of being an emissary in a third-world country became not only a challenging educational, economic and security mission, but also concealed another mission: Helping the local residents.

Helping both Muslims and Christians. 'We looked for places we could integrate into with the Hasidic spirit we bring.' (Photo: Israel Uzon)
"From our first day in Nigeria, we decided it was very important not only to care for the Jews, but also to see what change we could bring to this place," the rabbi says. "My insight was that if we want to be part of it, and really engage in Kiddush Hashem (sanctifying God's name through acts of kindness), we must look into ways to help. Nigeria is a very poor country, and there is no shortage of things that can be done. We looked for places we could integrate into with the Hasidic spirit we bring with us." The search did not last long, and Uzon found himself attracted to helping local children with special needs. "In the past, I volunteered with special children in Canada, and I am bringing my experience," he says. "These children suffer, it seems, from a double difficulty: On the one hand, it's a poor country, which finds it difficult to help even its non-special children. In addition, there is a local belief that these children are possessed by an evil spirit, and that leads to their abandonment in the good-case scenario, or to ceremonies aimed at driving out the spirit, which put their life in danger, in radical cases. "We began working with a local Christian institution. We sat with them, and saw that they have two urgent needs: One, to establish a normal boarding school for the children, and two, to open a protected employment center for the older ones in a way which will both give the institution some income and provide employment for the older youth." The new boarding school has already been inaugurated, Uzon says, and now the plan is to also establish a candle factory and a chicken coop which will provide the institution with an income and employment.

How do the Nigerians react to all of this?

"Nigeria is a country of believers. They see the 'Chosen People' (as they call the Jews) as very special people. It's part of their Christian tradition, so they are very excited about it. I also had the opportunity to take part in the Nigerian president's visit to Israel. They really, really appreciate it.

"We receive financial backing from a charity fund of the Waki family from France, together with Israeli companies which operate in the country, some in different security fields, like Eyal Mesika's company, and they help fund these projects."

Funding projects for both religions

Another project is operated by the rabbi for the Muslim community—for refugees' children, to be more exact. "It's for Muslim youth that flee northern Nigeria because of the terror of groups such as Boko Haram. There are many needy families.

"There is an existing humanitarian organization, and we are funding two projects through it: one, a basic roof, and the other, infant formula. Because of the security-related circumstances, it is important for us to fund projects for both religions, to make it clear that we support all the needy, regardless of their religion." You do realize that whoever reads this may be surprised. The Chabad House is supposed to be for Jews, isn't it? "That's completely untrue. The Lubavitcher Rebbe addressed this issue explicitly and stressed the need to contribute to the local community. In this sense, we are no exception. There are Chabad Houses in other places that help the local community in different ways. It's a Jewish value to help whoever needs it, regardless of whether they are Jewish or not, and there is of course a lot of Kiddush Hashem in it."