Protestors
Photo: Fight for the Liberation of Abera Mengistu Organization 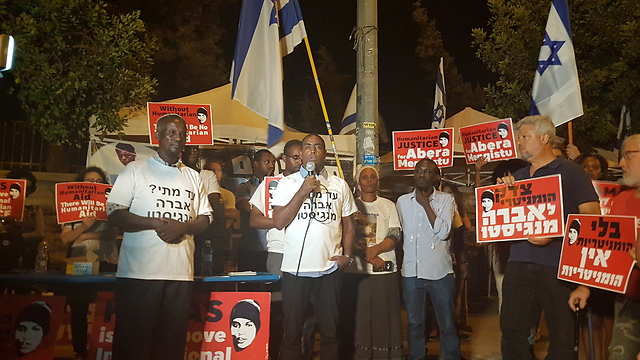 The family of Avraham 'Abera' Mengistu gathered before the PMO in Jerusalem with supporters to protest government inaction in returning the man to Israel, who has been missing since he crossed to Gaza in 2014.

The family of Avraham "Abera" Mengistu, an Ethiopian-Israeli reportedly held hostage by Hamas, gathered today with dozens of protesters in front of the Prime Minister's Office to protest what they considered to be government inaction for Mengistu's repatriation.

"We are here today to raise awareness of my brother's plight," stated Ilan Mengistu to Tazpit Press Service (TPS). "I think it's time for the prime minister to understand that it is forbidden to forsake an innocent Israeli citizen in the hands of terrorists." he claimed. "In two years, my brother has had no visits from the Red Cross, no one is aware of his exact location, and we, his family, have received no information whatsoever on his well-being, which violates his international human rights." he said.

The Mengistu family and protesters demonstrate in front of the Prime Minister's Office in Jerusalem (Photo: The Fight for the Liberation of Abera Mengistu Organization)

"Two years and not a single thing has been done." stated Ayaline, Mengistu's father, in an official statement. "Do we count for nothing? How come the families of Hamas' captives can come to Israel and hold their relatives when we have no information whatsoever? Mr. Prime Minister, this is in your hands!" he claimed.

Mengistu, a 28-year-old civilian from Ashkelon, crossed the border into Gaza in September 2014, through the Zikim beach for unknown reasons. He has been missing ever since. Hamas' spokespeople refute the family statements claiming that Avraham is mentally unstable. They claim he was captured as a prisoner of war. "Avera is a mentally unhealthy person who unfortunately ended up in Gaza, and is in need of medical treatment. This is a humanitarian case, not a political or military one," Sahar Mola, one of the activists who participated in a similar protest last year, told TPS at that time. The Mengistu family, along with the families of soldiers Oron Shaul and Hadar Goldin whose bodies are also in the hands of Hamas, have called for a tightening of conditions for Hamas prisoners in Israeli jails. They also denounced the last June's Israel-Turkey reconciliation deal for failing to include specific clauses about their children. "It is within the prime minister's capacity to use the rights of the Hamas prisoners in Israeli custody (such as family visitations, allowance, education or radio) as a bargaining chip to address the unlawful captivity conditions in which Avraham is being held." Ilan Mengistu told TPS. "We will not make peace with the current state of affairs and we will not stop pressuring the government until something is done."he concluded. Along with Avraham Mengistu, two Israeli Bedouins named Hisham al-Sayed and Jumaa Abu-Ghanima have also crossed the border to Gaza in similar circumstances, respectively in 2015 and 2016.

Ex-Yesh-Atid MK Pnina Tamano-Shata wrote on Facebook that the protest is proof of the government's inaction. "Two years have passed and nothing has been done. The protest proves that the public willjj not abandon the fight in the face of governmental incompetence."