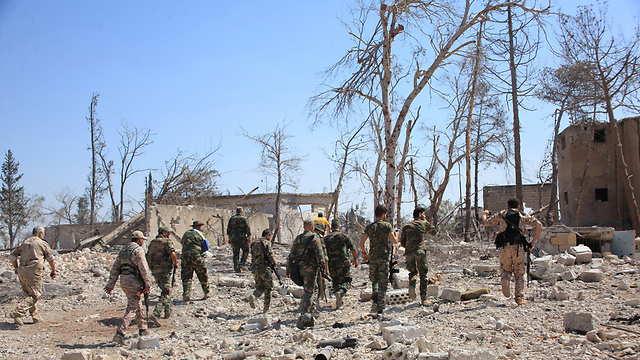 Dozens of violations of Syria ceasefire, no aid reaching Aleppo

Both the Assad regime and rebel forces claim that dozens of violations of the ceasefire have occurred after going into effect four days ago, but neither side broke the rules. The UN reports that the Syrian army is not allowing aid trucks into Aleppo, while Russia is attacking the United States for 'not meeting obligations.'

Four days have passed since the Syrian cease fire began, and it seems that despite it's fragility, the signatories by and large still haven't broken it. Despite this, the Russian Defense Ministry counted 45 ceasefire violations on Thursday, pointing an accusatory finger at the United States.

"(The Americans) are making it more difficult to fight against the terrorists, and the rebels which they support are violating the ceasefire," the Russians said.

Meanwhile, the UN said that "Assad is not permitting aid trucks to get to Aleppo." At the same time, the Assad regime has washed its hands of any and all blame, saying that they have stopped attacks against rebel positions.

The Russian government clarified that it has completely stopped all joint strikes with the Assad regime on Rebel positions, and that Russian soldiers have begun to withdraw from the main roads leading to Aleppo. They also said that the only place where the ceasefire isn't in effect is in the fight against ISIS.

Despite this, Al-Jazeera, which is aligned with the rebel groups, reported that the Assad regime has continued to attack and violate the ceasefire in conjunction with Russian jets. The Syrian regime put up cameras with a constant live stream of Aleppo to prove to the world that they aren't violating the ceasefire. Despite the fact that the ceasefire was created after unprecedented cooperation between the US and Russia, the Russians have expressed harsh criticism at American conduct during the cessation of hostilities.

A Syrian soldier in a tank outside of Aleppo (Photo: AFP)
"The Americans aren't standing by their agreements, aren't sending the exact locations of the positions of the moderate rebel groups, and the groups which (the US) supports aren't respecting the ceasefire." 'The Assad regime isn't allowing aid trucks to go through'

Aleppo continues to burn (Photo: AFP)
Meanwhile, the UN claims that the Assad regime has been preventing aid trucks from reaching Aleppo – aid which was supposed to have reached the besieged city on Friday. "The humanitarian aid, which represents a huge change for the citizens of the city – apart from the bombs – has run into problems," said the UN Special Envoy to Syria Staffan de Mistura. He added that the expectation was that the Assad regime will respect its commitment to opening up roads to aid, however, the regime has yet to do this.

The US and Russia sign the ceasefire deal (Photo: AP)

"The commitment is to give a final approval to the UN to be able to send the aid to the people who need it," he continued. "We still haven't received the approval; that’s a fact. It's a shame that we are wasting time. These are days that we need to use to send the aid convoys, especially because there is no fighting. This is the agreement which was reached between the Russians and the Americans, and it needs to be carried out immediately."

However, strikes against ISIS have continued.