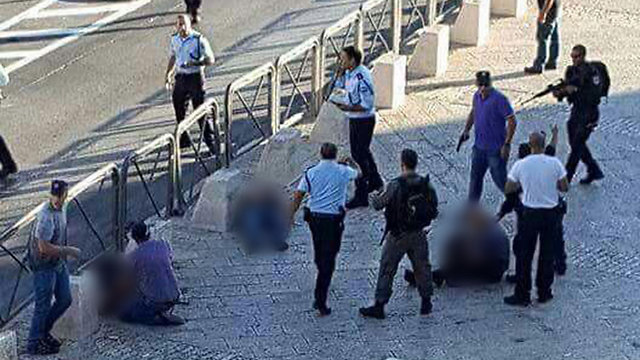 A 38-year-old policewoman and a 47-year-old policeman were stabbed at Herod's Gate in the Old City on Monday morning; the attacker took them by surprise and stabbed them multiple times before being shot by security forces on the scene.

A 38-year-old policewoman and a 47-year-old policeman were wounded in a stabbing attack at Herod's Gate in Jerusalem's Old City Monday morning; Magen David Adom (MDA) reported that the two were left in critical and serious condition respectively.

The attack took place shortly after 7:30am. The terrorist apparently approached from the direction of Damascus Gate when he spotted the two members of the police. He followed them and stabbed them multiple times with a knife. Police spokeswoman Luba Samri said that the policewoman, who was originally reported to be 19 years old, was stabbed in the neck.

The policeman was able to draw his sidearm and shoot the attacker, whose condition was described as critical. He also is receiving medical treatment.

The Israel Police have identified the attacker as a vicenarian resident of East Jerusalem.

AP and TPS contributed to this report.