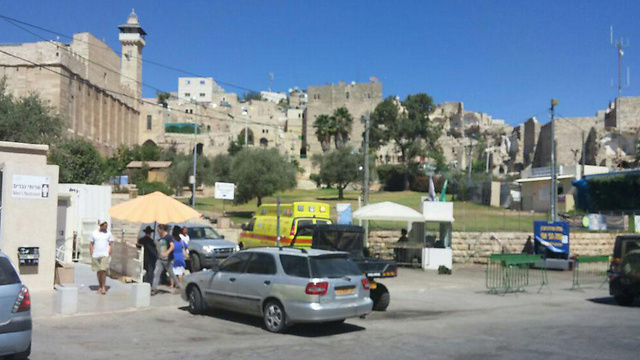 Attempted stabbing attack thwarted at Hebron's Cave of the Patriarchs

Two Hebron residents, who attempted to simultaneously stab Border Police officers at the holy site, were shot by alert security forces before being able to harm anyone; one of the terrorists died at the scene while the other later succumbed to his wounds.

Two terrorists attempted to stab Border Police officers at the Cave of the Patriarchs in Hebron on Monday afternoon. They were shot and very seriously injured before they could harm anyone. One attacker was declared dead at the scene, while th second was pronounced dead in hospital.

According to the police, the two attackers are Hebron residents who came to the site intending to carry out an attack on the Border Police forces there. On pulling out their knives, the Border Police at the scene shot at the attackers.

This was the second stabbing attack of Monday, with an east Jerusalem resident stabbing two Israel Police officers in the morning before one of them managed to draw his weapon and shoot their attacker.