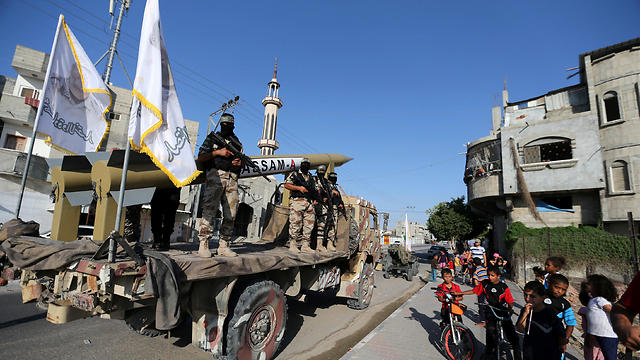 A powder keg waiting to explode

1. An inflammable situation: More than 20 years have passed since the Oslo Agreements and the comprehensive economic agreement were signed between Israel and the Palestinian Authority. According to an analysis published last weekend by the International Monetary Fund (IMF), the gross domestic product per capita in the PA territories grew by 0.1% over this period. In other words, it did not grow at all: The real GDP per capita today is identical to the GDP in 1994.

The gaps expanded despite the loud talk about economic peace, despite the massive aid the Palestinians have received since Oslo and despite the significant improvement in the PA's finances. The IMF and the World Bank are pointing an accusing finger at Israel and emphasizing the obstacles created by Israel to independent Palestinian economic development. That claim is true, but is incomplete.

A separate look at the West Bank on the one hand, and the Gaza Strip on the other hand, reveals that the economic development of the two areas was completely different. The Palestinian GDP per capita in the West Bank is 50% higher than it was immediately after the Oslo Agreements, while the GDP per capita in Gaza is 25% lower – a result of the failed Hamas rule and the military conflicts with Israel.

The required statement from this review is that the binational state being created in practice between the Mediterranean Sea and the Jordan River is based on deep and extremely dangerous economic gaps, not just between the Israelis and the Palestinians but also between the Palestinians themselves. It's a powder keg.

Auschwitz. Poland has confessed its sins, in detail and courageously (Photo: AP)

I am presenting these facts in response to what my colleague, Yaron London, wrote in his op-ed "Between Warsaw and the Nakba." "We are asking for self-examination, and Poland is refusing," he wrote. His sources misled him: Poland was and still is a champion in self-examination over the treatment of Jews. Poland has confessed its sins, in detail and courageously.

More than 1,000 studies, books, articles and speeches by Polish opinion leaders have been dedicated in the past decade to the shameful behavior of the majority of their people towards the persecuted and murdered Jews. The Institute of National Remembrance in Warsaw has issued thick volumes of studies and historical analyses on those issues with no intent to cover up.

The institute investigated, among other things, the murder of Jews in the town of Jedwabne in occupied Poland in July 1941 and the pogrom against the Jewish residents of Kielce in sovereign Poland in July 1946, and ruled without any hesitation that the blood was shed by Poles.

The nationalistic right in Poland, which is now in power, criticizes the previous governments for their "excessive engagement" in the country's responsibility for the fate of the Jews. It plans to pass anti-democratic legislation in the parliament that will make an objective discourse and commemoration very difficult.

This must be opposed, but it won't change the fact that other countries in Eastern Europe, whose citizens played an active role in the murder of hundreds of thousands of Jews, are very far from the Polish national effort to expose the dark stains of its past.