A truck of humanitarian aid arrives at Gaza from Turkey at Gaza
Photo: Crossings Authority Ministry of Defense 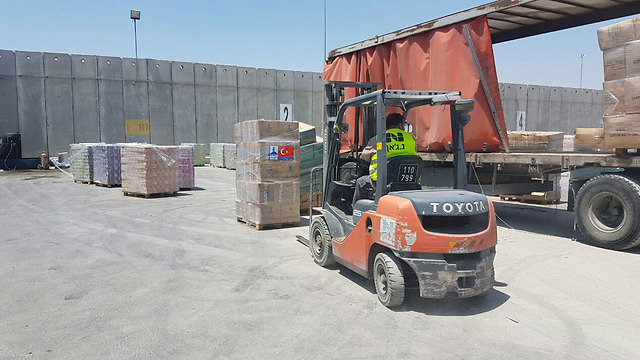 While Israeli delegates elaborate on the various projects Israel supposedly implements to improve Palestinian lives, most of the projects it has committed to are stuck due to security concerns or mismanagement by the Palestinians themselves.

Minister without a Portfolio Tzachi Hanegbi (Likud), who headed the Israeli delegation to the United Nations Relief and Works Agency for Palestine, presented a list of steps that Israel is supposedly seeking to implement to improve the Palestinians' economic reality during the agency's annual meeting at the UN General Assembly on Tuesday.

However, several of these planned steps are not pursued, either because they are blocked by Israel's security-based limitations that it places on the Palestinians, or due to the Palestinians' mishandling of such initiatives.

Dozens of foreign affairs ministers took part in the meeting, among them US Secretary of State John Kerry, High Representative of the European Union for Foreign Affairs and Security Policy Federica Mogherini, ministers from Saudi Arabia, Kuwait, the UAE, Tunisia and more.

Hanegbi mentioned several items describing Israel's intent to improve the life of the Palestinian population, including providing electricity to the West Bank following the settlement of the Palestinian Authority's debt to the Israel Electric Corporation, mail services and an agreement that will allow Israeli banks to conduct business with Palestinian banks. These initiatives were led by the Coordinator of Government Activities in the Territories Maj. Gen. Yoav (Poli) Mordechai.

In addition, Hanegbi mentioned that Israel is planning on supplying the Palestinian Authority with six million cubic meters of water. Currently, the Palestinian population is suffering from a water shortage, since the PA has not been granted approval to draw water from the Mountain Aquifer, and since many of the meetings set up to find a solution to this problem are boycotted by the Palestinian representatives.

Israel has also committed itself to connecting the PA to Israel's natural gas pipeline, a long-term project that is far from being implemented. The same goes for erecting a hospital near the town of Beit Sahour in Area C, where Israel normally refrains from approving PA initiatives. Hanegbi additionally mentioned a plan to improve the passageways between Gaza and Judea and Samaria. Roughly one year ago, Israel signed an agreement meant to set up a cellular network in Judea and Samaria and Gaza. Hanegbi mentioned this, as well, despite the fact that the project does not seem to have begun. Another Israeli project aimed to benefit the Palestinians is the erection of a power line meant to supply Gaza with a 100 megawatt voltage of electricity, which has also not yet been approved. An additional project that is currently halted is the connection of a waste management facility in northern Gaza to the electric company, due to a disagreement between the World Bank, Hamas and Israel. It should also be noted that other countries within the Relief and Works Agency for Palestine that pledged to donate money have yet to do so, mainly due to the influx of refugees within their own borders, or, in the case of Arab countries such as Jordan, Egypt and Saudi Arabia, fending off ISIS. As a result, donations have gone down from $800 million to $450 – 500 million, while the PA continues to amass an ever-growing debt. The World Bank reported that out of all the promises of the donating countries, only 16% of the total Gaza rehabilitation plan following Operation Protective Edge have actually been transferred. A major hindrance to its rehabilitation has been the continued limitations Israel places on Gaza due to security concerns, which keeps private investments in the PA at one of the lowest in the world. The World Bank furthermore found that despite having the ability to alleviate some of the financial standstill in Gaza, Israeli limitations continue to act as the primary obstruction to creating real market competition within the Palestinian economy. A report on the matter, published just before the agency's convening, mentioned that removing these limitations from Area C alone could increase the Palestinian Gross Domestic (GDP) by 35%, bringing about a similar increase in employment. Israeli officials emphasized that while Israel does not provide Palestinians with aid, it has been working to remove bureaucratic roadblocks and issue approvals that have yet to be handed out regarding larger infrastructure projects. Hanegbi updated that "In a very successful meeting with the Palestinian Treasury minister, we agreed to reconvene the joint water committee, which hasn't met in seven years. We also agreed to promote issues that have been stuck in limbo for years and it is high-time that they be implemented." The UN Relief and Works Agency agreed to reconvene in six months in Brussels, to follow up on all the projects.