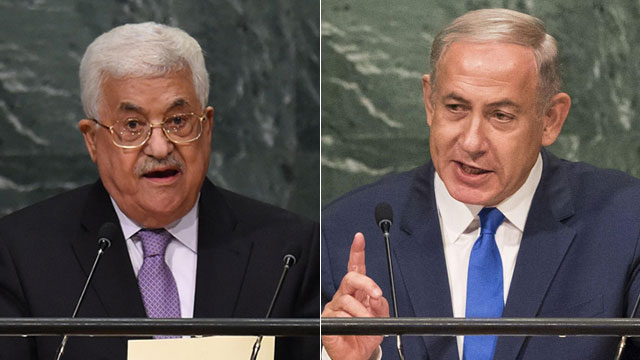 Come to the Knesset, Abbas

Op-ed: It’s true that Netanyahu didn’t really mean it, but an invitation is an invitation. Find the courage, prepare an ardent speech and tell us and your people what exactly is it that you want.

You’ve been given a chance? Grab it with both hands and come deliver the address of your life in a special Knesset session in Jerusalem. The floor will be yours, Mahmoud Abbas. You'll be the star. The eyes of the whole world, as they say, will all be directed at you. Find the courage, bring the text and say exactly what it is that you want to say—what you're suggesting, how we move forward.

Even if your loyal spokesman, Ahmad Tibi, did a good job describing Prime Minister Benjamin Netanyahu’s invitation at the United Nations General Assembly last week as a theatrical gesture rather than a real diplomatic initiative, an invitation is an invitation.

Come tear the mask off Netanyahu’s face. After the cameras took pictures, the microphones broadcast, and almost every media outlet quoted Netanyahu calling on you you (“I have no partner”) to come to us, take him up on his word. "I," Netanyahu pledged, "am willing to come and speak at the Palestinian parliament in Ramallah." Don’t worry, Abbas, Netanyahu won’t show up. He has no intention of coming, and the Shin Bet won’t let him.

Prime Minister Netanyahu (R) and Palestinian President Mahmoud Abbas address the UN General Assembly (Photo: AFP)
Netanyahu’s speech, even his rivals agree, was polished. Much more so than your delusional call on the British government to apologize for the Balfour Declaration. Why are you clinging to the Balfour Declaration? It might be your age or it might be your advisors who have made you forget the Arab refusal to recognize the Partition Plan. Notice how Netanyahu makes sure to look forward, while you insist on settling an account with the past. Bibi knows how to sell the two-state dream. And you talk about peace, but sound like someone who doesn’t really recognize the State of Israel’s right to exist.   It’s not too late. Try to imagine what would happen if one of your senior assistants called Knesset Speaker Yuli Edelstein and announced, "The president of the Palestinian Authority is coming to address the Knesset." We know the excuse: You are afraid to come out empty-handed, you’re guessing Bibi will trick you, you are afraid of the response from the Palestinian public. You also remember what happened to Egyptian President Anwar Sadat. I’ll agree with you that Netanyahu didn't really mean it—that he missed out on an acting career, as Tibi put it. Let’s also agree that he would not have called on you to come to the Knesset if he didn't know for certain that you wouldn't come. So what? Surprise him. Play a counter-trick on him. Prepare an ardent speech, present the Palestinian red lines and come talk to your people and to us over his head.

It’s easy to sit with your people and complain about Netanyahu. Say it to his face. Talk about the division of Jerusalem, suggest a logical solution for the settlements, talk about economic collaborations and about stopping the incitement to terror. To tell you the truth, it doesn’t matter what you say. Your presence will kick off a movement.

Go out on our street. Ask for a meeting with students. Prove to them that you are living in the present and are not settling a score with that which didn’t happen. The missed opportunities are not just on our side. Remember that the wider world is no longer interested in the Israeli-Palestinian conflict. No one will volunteer to sink in a quagmire of endless arguments. We've already been there. Ask Saed Erekat.

We're busy working to prevent the next conflict with Hamas. You know as well as we do that the next fight will be much more violent than Operation Protective Edge and will have dangerous repercussions on your territory as well. Don’t rely on us. Just as you're insisting on waiting for the next president in Washington, there are people here who are already marking the next president to take your seat in Ramallah.