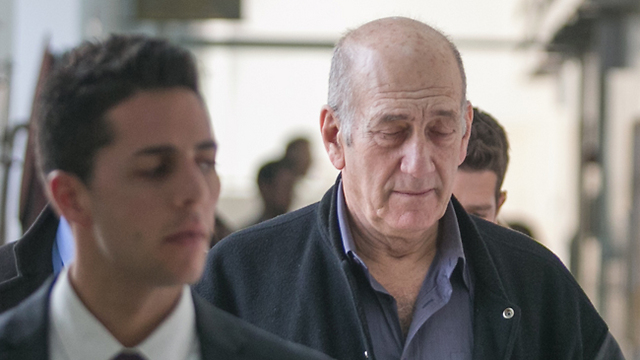 Court also rejected appeals filed by the state against Olmert’s acquittal in the 'Rishon Tours' corruption case, and against his relatively lenient punishment of a suspended sentence for the 'Investment Center' affair.

The Supreme Court rejected three appeals on Wednesday morning in corruption cases involving former prime minister Ehud Olmert, meaning he will serve eight months in prison in addition to the 18 months he is currently serving for bribery in the Holyland real estate case.

Olmert was convicted for receiving and using over $150,000 in envelopes from US businessman Morris Talansky between 1993 and 2002. The trial began in 2008, when Olmert was prime minister. Olmert appealed the ruling, but it was unanimously rejected.

The Supreme Court also rejected two appeals filed by the state against Olmert’s acquittal in the "Rishon Tours" corruption case, and against his relatively lenient punishment of a suspended sentence for the "Investment Center" affair.

Olmert has now served seven months at Maasiyahu Prison, located in the central Israeli city of Ramla. Olmert is serving his term in Block 10, a high-security wing designated for prisoners who have held positions of influence such as judges, policemen, and public figures.

Olmert returning to the Maasiyahu Prison after a furlough (Photo: Dana Kopel)

Talansky affair: Olmert was found guilty of taking hundreds of thousands of shekels for private use while serving as economy minister. Most of this money came from businessman Morris Talansky. The former prime minister didn't report the money to the state comptroller as required by law, and he was found guilty of graft, aggravating circumstances, fraud and breach of trust. He was sentenced to eight months in prison. It is th appeal of this sentence that the Supreme Court rejected on Wednesday.

The Investment Center affair: This involved Olmert granting favors in his capacity as a minister to his confidante Uri Messer despite a conflict of interest. Olmert was convicted in 2012 and received a suspended sentence only. The state appealed the lightness of the sentence, but the Supreme Court rejected it.

Rishon Tours affair: This case entailed allegations that Olmert was double and triple-billing trips abroad sponsored by Jewish institutions, and either pocketed the difference or financed trips for relatives. In 2012, Olmert was acquitted of any wrongdoing.

Holyland Affair: Investigations found that during his tenure as mayor of Jerusalem, Olmert accepted bribes to overlook building codes for the construction of the Holyland buildings in the capital.

He was convicted of receiving NIS 560,000 ($160,000 US) in bribes. He was acquitted of two other charges of bribery. The judge rejected Olmert's version of events, declaring that he had lied to the court. The Tel Aviv district court sentenced him to six years in jail, but following his appeal his sentence was reducd to 18 months.

Reprinted with permission from the Tazpit Press Center (TPS). Naama Cohen-Friedman contributed to this story.