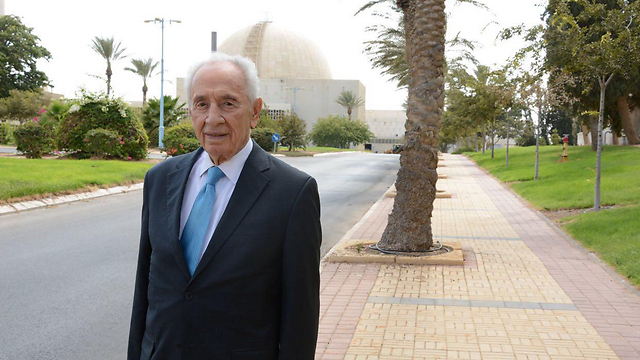 With a state funeral in the works the likes of which haven't been seen since Rabin was assassinated in 1995, the Israel Police and the Shin Bet are preparing for their largest security operation ever; they will be protecting not only foreign dignitaries, but also over 100,000 well wishers who wish to accompany the former president on his final journey.

Israeli authorities began on Wednesday to prepare for the funeral on Friday the former President and Prime Minister Shimon Peres, who died early Wednesday morning. Dozens of world leaders are expected to attend, is expected to be an international media event. As such, it may be a tempting terror target and will require an unprecedented deployment of Israeli security forces in addition to the protective details of the many foreign dignitaries.

Peres’s funeral is scheduled to take place at 9:30am on Friday morning. He will be buried in the Great Leaders of the Nation section at Mount Herzl Cemetery in Jerusalem next to Yitzhak Rabin. Peres's body will lie in state at the Knesset on Thursday to allow the public to pay their final respects. Yona Bartal, a former personal aide to Peres, said the arrangements were in line with his wishes.
Preparing Peres's grave
X

Discussing the preparations being made for Shimon Peres's upcoming funeral, Israel Police Commissioner Roni Alsheikh said "we are facing an operation of unprecedented proportions."

"We are enlarging the preparations for the funeral procession. There will be 7,000 police officers, Israel Border Police, and other volunteers who will be deployed to the field to protect and keep public order, as well as help direct traffic in Jerusalem," Alsheikh continued.

The operation will be called "Operation Now Tomorrow."

The Israel Police have announced that the main roadways leading to the Knesset will be closed beginning at 8:00am on Thursday, including: Eliezer Kaplan St, Yoel Zusman St, and route 16 which encircles the Knesset. These roads will remain closed until Friday morning when the funeral procession begins on its way to Mt. Herzl.

Lior Akerman, former deputy head of the Shin Bet and intelligence and terrorism expert, explained that, "The Shin Bet is primarily responsible for personal protection such as the Prime Minister, President, and Israeli Government Ministers. It is also responsible for the protection other heads of states, in cooperation with foreign security services and their embassies. The Shin Bet is aware of all security arrangements, down to the exact number of body guards, and who is carrying a weapon."

Flags at half staff at the Knesset (Photo: Alex Kolomoisky)

The two main scenarios that the security establishment are on guard against are terrorist attacks and so-called lone wolf attacks, who may attempt to take advantage of the situation and harm an Israeli or foreign diplomat.

"Whoever wants to plan an attack has two full days to prepare and they know exactly when and where people will be arriving. It is a security nightmare," admits Akerman. "Terrorist organizations have an opportunity to catch a lot of officials at the same place and at the same time. The risk is clear and understandable, so the challenge here is to hermetically seal travel routes, the entrances and exits (to the events), and to establish a secure perimeter so that no one can get close. The Shin Bet knows how to do it."

The Israel Police are preparing to close off Highway 1 that connects Tel Aviv and Jerusalem periodically once dignitaries begin to arrive. Roads in the capital around the Knesset and Mount Herzl are also expected to be closed.

In all likelihood, once foreign leaders arrive, they will not be exposed for a moment. They deplane in sterile areas, are transferred to armored vehicles, and travel in convoys while police close a wide perimeter of security and employ various technological tactics to identify any threats. Akerman added, "Intelligence will also be utilized to focus on specific individuals who have been identified beforehand or who threatened to cause harm."

This will be the largest gathering of international dignitaries in Israel since the funeral of Prime Minister Yitzhak Rabin, who was assassinated by a Jewish ultranationalist in 1995.

The Ministerial Symbols and Ceremonies Committee, headed by Minister of Culture and Sport (Likud) Miri Regev, has authorized the funeral plans.

Peres's burial plot (Photo: Alex Davidkovich)
On Thursday at 8:45am, the president, the speaker of the Knesset and the prime minister will lay wreathes on Peres's casket, which is to be stationed outside the Knesset building. From 9am to 9pm, the public will be permitted to file past the country's ninth president. The Israeli flag is to be flown at half staff until Thursday night. On Friday at 8:30am, Peres's casket will leave the Knesset for Mount Herzl. At 9:30, there will be a farewell ceremony. At 11:00, those assembled will walk to the cemetery, with the state funeral beginning at noon and expected to last an hour. Though the burial attendance will be limited, large screens will display the ceremony for the public who come to mourn at Mount Herzl.

Dozens of additional airport workers will be sent to help alleviate the pressure put on Ben Gurion Airport as more than 95,000 persons are expected to pass through it in the wake of Peres’s death.

Photo: Gil Yohanan
Thirty commercial flights and more than 60 private planes are expected to land in Ben Gurion Airport as reporters, politicians, world leaders and people coming to pay their respects at the funeral of the revered statesman. In the western section of the airport, Air Force One, President Barack Obama’s plane, will touch down. Airport workers will also be required to expedite the process of unpacking suitcases so as to avoid delays. The airport has also converted areas to temporarily accommodate the expected influx of commercial and private planes—an initiative which began immediately after Peres was evacuated to hospital two weeks ago. Moran Azulay, Itay Blumental & Roi Yanovsky contributed to this report