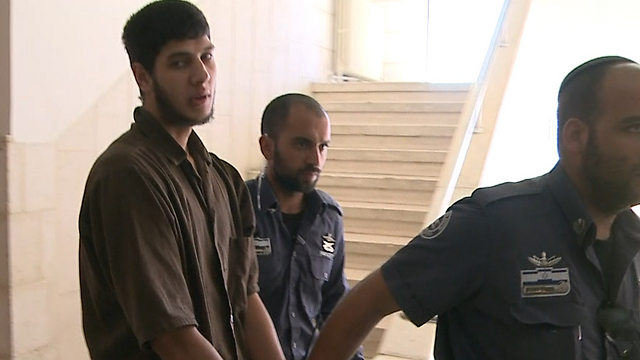 Muhammad Joulani, a 22-year-old resident of Shuafat refugee camp in East Jerusalem, was indicted for planning to blow himself up in the capital last month; Investigation reveals he established contact with Hamas operatives in Gaza and wrote a will; Joulani aborted a separately planned stabbing attack for fear of house demolition.

A 22-year-old resident of the Shuafat refugee camp in East Jerusalem has been arrested and indicted for planning to carry out a massive suicide bombing attack in the capital last month, it was cleared for publication Tuesday by the Shin Bet. The arrest of the would-be terrorist—Muhammad Fauaz Ibrahim Joulani—came following a joint operation with the Shin Bet and the Israel Police.
Muhammad Joulani: 'Allahu Akbar'    (צילום: עפר מאיר)
X

The investigation revealed that Joulani, a Hamas member, contacted activists from the terror organization controlling the Gaza Strip and expressed his will to carry out attacks on its behalf.

Joulani was asked to recruit additional accomplices to conduct terrorist attacks and managed to compile and send a list of names to his handlers in Gaza.

The investigation further revealed that Joulani had a number of ideas for potential terrorist attacks such as a shooting attack at the Hizma checkpoint, a bombing at a Jerusalem store in which he had worked in 2011, throwing a pipe bomb at the Shuafat checkpoint. He also considered carrying out a bombing attack at the Jerusalem Central Bus Station and the busy Malha Mall.

The latter plan was abandoned as a result of increased security measures at both locations. Looking to strike less secure targets, Joulani planned to revert back to a strategy which had been the central characteristic of the Second Intifada. To that end, he planned a suicide attack on a bus line in the Pisgat Ze'ev neighborhood of Jerusalem.

In the course of planning the attacks, Joulani acquired the raw materials necessary for building a lethal explosive device, including nails and batteries. However, following experiments with the materials, he was discovered by his parents and was subsequently forced to travel to Hebron to purchase additional raw materials.

At the beginning of September, it was decided that the suicide attack would be carried out after Eid al-Adha holiday so as to prevent security measures from disturbing Muslim worshippers at the Temple Mount.

In order for Joulani's activities to be financed, he was sent to Hebron where he received NIS 7,000 from a local resident to acquire the necessary explosive materials. At the behest of Joulani's handlers, he recorded a last will and testament, but was unable to send the recording due to technical difficulties.

The terrorist received financing from people in Hebron

The investigation also detailed an incident in which Joulani intended to carry out a stabbing attack in Pisgat Ze'ev, but ultimately decided against its implementation for fear that his parents' home would be demolished by Israeli security forces in retaliation.

Two family members were also arrested with Joulani, one of whom—Iyad Joulani—was also found to be in possession of hidden weapons.

The Shin Bet and Israel Police said that the arrest illustrate the relentless efforts of Hamas officials in the Gaza Strip to carry out serious terrorist attacks inside Israel and the West Bank. Furthermore, both agencies emphasized the use of Arab-Israeli residents by Hamas to gain access to Israeli territory.