Women at a pro-Palestinian protest outside the Israeli Embassy at Ankara
Photo: EPA 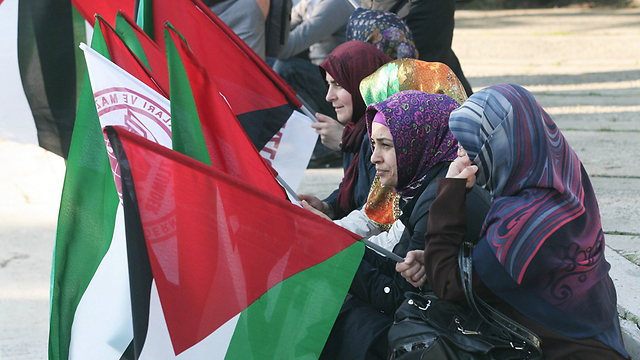 Activists who were present on the Mavi Marmara flotilla in 2010, express their concern that a Turkish court will dismiss their claims against Israel' use of force when taking over the flotilla as it attempted to enter Gaza; An Istanbul high court will hold a hearing in the case on Wednesday, four months after the two nations normalized relations.

Activists who were aboard the Marmara flotilla that attempted to reach the Gaza Port in 2010 issued a statement Wednesday, saying they fear a Turkish court is set to halt a case brought by them because of a deal to restore ties between Israel and Turkey.

Relations between Israel and what was once one of its Muslim allies crumbled after Israeli marines stormed the Mavi Marmara ship in May 2010 to enforce a naval blockade of the Gaza Strip.

Women at a pro-Palestinian protest outside the Israeli Embassy at Ankara (Photo: EPA)
The court case has been brought on behalf of hundreds of people who claim they were wounded, assaulted or imprisoned during the raid.

A still image from the IDF's takeover of the Mavi Maramara flotilla (Photo: IDF Spokesperson's Unit)
An Istanbul high court will hold a hearing in the case, representing 740 activists from 37 countries, on Wednesday, four months after the two nations normalized relations.

Photo: IDF Spokesperson's Unit
"Our concern on behalf of the victims, who have all participated in this criminal case, is that it will be stopped by the court as a result of the treaty," said human rights lawyer Rodney Dixon. Turkish officials on Monday declined to comment on the case.

Ya'akov Bolinet Alniak, a protestor who beat IDF soldiers aboard the Maramara and was later killed by a US airstrike in Syria
Israel, which had already offered apologies for the raid—one of Turkey's conditions for a deal, and one which Prime Minister Benjamin Netanyahu had initially refused— agreed to pay $20 million to the families of those killed aboard the flotilla by IDF soldiers.

A senior Turkish official has called the deal a "diplomatic victory." Under the accord, the naval blockade of Hamas-run Gaza, which Ankara wanted lifted, remained in force, but humanitarian aid was to keep going into Gaza via Israeli ports.

Dixon said the agreement also specified that there would be no further criminal or civil proceedings over the raid. But he said halting the case would be contrary to international law and the European Convention on Human Rights.