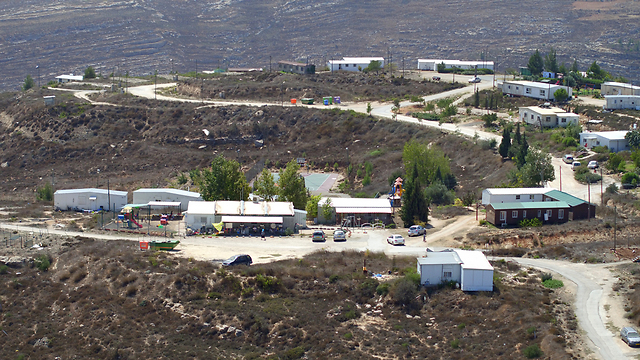 To the very last inch

Op-ed: There is no need to argue over the number of houses that will be evacuated and demolished in Amona outpost. Eventually, not a single Jewish home will remain in that outpost – or in the entire West Bank.

If it were not a sad, almost tragic story, the argument over how many houses will be evacuated and demolished in the Amona outpost upon the implementation of the Supreme Court ruling could have been defined as funny and even ridiculous: Nine houses? Perhaps 19? Or maybe 29?

This argument is unnecessary, because unfortunately, at the end of the day, not a single Jewish home will remain in Amona, or in the entire Judea and Samaria area. Because eventually we will likely be forced to return all the territories to the very last inch. We have been holding onto these territories for some 50 years now, and for Israelis that’s a very long time. What are 50 or 70 or 100 years for the Arabs? A footnote in the history books. Four or five lines.

Here’s an example from the not-too-distant history: There used to be a prime minister in Israel who many people saw as strong, a Jew in his body and soul. His name was Menachem Begin. The man, who would fill city squares to the brim with an inflamed crowd, promised before traveling to the Camp David talks in the 1980s that should he be asked to return Sinai, he would pack his bags and come home. That same man, who was very firm in his words and statements, also declared his intention to build a home in the settlement of Neot Sinai. His supporters applauded him.

Amona. American knows that Judea and Samaria will eventually fall into the Palestinians’ hands like ripe fruit, whether as part of a peace agreement or forcibly (Photo: Toomeriko)
After returning all of Sinai to Egypt, Begin left the Taba area under Israeli control, to demonstrate that he had kept at least part of his promise and had not given back everything to the very last inch. Egyptian President Anwar Sadat came along, shook his head and said: Noooo, to the very last inch. We tried to deceive the Egyptians with landmarks, to play for time, to show them who’s boss. After all, we’re the ones who occupied Sinai. But the Egyptian president said: Nooooo. What a bastard…

Judea and Samaria are not Sinai of course, and the basis for our ownership claim on the area is neither identical nor similar, although in this case too we are playing tug of war with the Palestinians.

The problem is that these days, as we speak, nearly all nations of the world, including the great United States, don’t support the Israeli stance. On the contrary. Even the US believes that 50 or 60 or 70 years are not eternity. It has patience. It knows that Judea and Samaria will eventually fall into the Palestinians’ hands like ripe fruit, whether as part of a peace agreement or forcibly.

It will be painful and sad to evacuate hundreds of thousands of people from their homes. Some will do it acquiescently and in return for a decent payment. The others will fight for their home. In the Yamit region, this battle took several days, and we eventually handed more than 20 communities over to the Egyptians. In Gush Katif, the evacuation took almost a week.

The Americans are secretly laughing at the number of settlers in Judea and Samaria, which are multiplying themselves every two days in order to deter them from carrying out a forced evacuation. The US has experience with such mega operations.

The main question right now is who will issue the order: Hillary Clinton or Donald Trump? Do you think that's impossible? That US is going out of its way to honor Israel? That may be the situation during election time, but after the elections the deluge will arrive. We also thought Bill Clinton was Theodor Herzl’s brother and George W. Bush was an honorary member of the World Zionist Organization. We were also wrong then.

If only this article proves to be wrong too, and Amona does not serve as a model for what will follow.