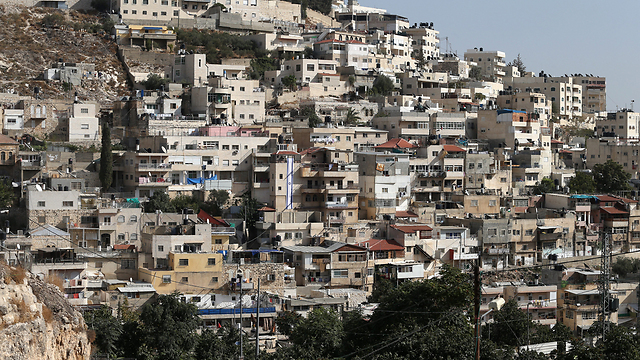 The suspect, who lived in east Jerusalem, planned to carry out a shooting attack against Israeli security forces and civilians in the capital; Facebook page reveals he supported Hamas, frequently incited against Israel, and was involved in a number of previous terror-related attacks.

An Israeli resident living in the Ras al-Amud neighborhood in eastern Jerusalem was arrested three weeks ago on suspicion of planning to carry out multiple acts of terrorism in Israel, it was cleared for publication Thursday afternoon.

The resident, identified as Muhammad Mussa Muhammad Abassi, was arrested as part of a joint operation between the Shin Bet and the Police Central Unit, said a press release issued by the Shin Bet.

The intelligence organization’s investigation revealed that during recent months, Abassi planned to carry out a shooting attack against Israeli security forces and civilians in east Jerusalem and attempted to acquire a weapon to that end.

It also emerged during questioning that Abassi supported Hamas and was involved in a number of rock and Molotov Cocktail-throwing incidents, as well as being responsible for aiming fireworks at security forces and Israeli vehicles. Interrogators further discovered that the suspect tried to gather information on how to assemble a pipe bomb.

Abassi’s Facebook profile alone provided convincing evidence that he supported Hamas with numerous posts expressing as such in addition to uploading posts of incitement to violence and terrorism against Israel.

One case in point was the support Abassi expressed for a terrorist who committed a suicide bombing attack on the number 12 Egged bus in Jerusalem last April in which 21 people were wounded.

He also praised the terrorists who carried out a lethal shooting attack in Tel Aviv’s popular Sarona Market in June, which left four dead and 16 wounded.

“The arrest of Abassi who, as a resident, had access to the entire city, prevented a serious attack in the city of Jerusalem,” the Shin Bet statement read.