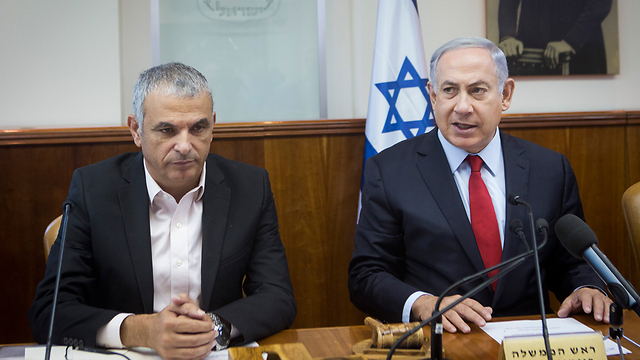 In a tense inter-coalition dispute that could have brought down the government, PM decides to delay ministerial vote on fate of Israel Public Broadcasting Authority, set to replace Israel Broadcasting Authority; Kahlon: 'If Netanyahu brings this to a vote, we'll be on our way to early elections.'

Prime Minister Benjamin Netanyahu will not bring the bill to cancel the Israel Public Broadcasting Corporation (IPBC) to a vote on Sunday as originally planned. This comes as Minister of Finance Moshe Kahlon is working against the attempt to cancel the IPBC.

Kahlon is focusing his resistance on the expected high cost he believes canceling the IPBC while maintaining the Israel Broadcasting Authority (IBA) will incur.

Raising the bill to a government vote without prior agreement with Kahlon would have generated serious conflict between the two. The prime minister, who was until now emphatically for cancelling the IPBC, decided to withdraw the timetable and not bring the bill to a ministerial vote.

A hearing on the matter was held by the Economic Affairs Committee, which was punctuated by a fiery speech by the Chairman of the Writers Guild, Amit Lior, in which he attacked the intention to close the IPBC and went on to declare his intention to begin a hunger strike.

Deputy Director of Budget at the Ministry of Finance, Shira Greenberg, said during the hearing that, "By closing the IPBC, there will be a cost of NIS 370 million every year."

The IPBC was set up following a reform meant to close the IBA and replace it with public broadcasting that was cost efficient, effective and not dependent on commercial revenue. After already establishing the IPBC and shortly before it was meant to supersede the IBA, Prime Minister Netanyahu decided to cancel the reform, which lead to conflict with the Minister of Finance, Moshe Kahlon.

Before the announcing the postponement, officials close to Kahlon said he was "Completely serious. This is no game. We will do everything to make sure this isn't brought to a vote. If Netanyahu brings this to a vote, we'll be on our way to early elections."