The Camara girls coming to Israel
Photo: the International Fellowship of Christians and Jews 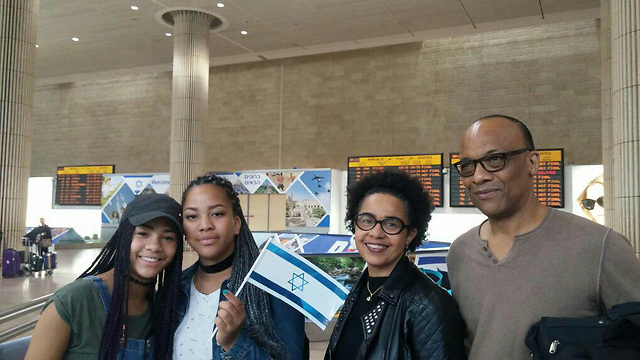 From Poland to the Ivory Coast to Israel: ‘We’ve come home’

Emmy Camara’s mother escaped the Nazis to France, met a man from the Ivory Coast and returned with him to his homeland, where her daughter Emmy was born; Emmy went on to marry a local man who belonged to a tribe that believes it is a descendent of the Tribe of Dan; now the couple has made aliyah with their twin daughters to Israel; their first mission: ‘to learn Hebrew.’

Among the 300 olim who landed in Ben Gurion International Airport on Tuesday and Wednesday, were the four members of the Camara family, who arrived from France and who have a dramatic story spanning across continents that would put Hollywood to shame.

Emmy, a medical doctor, came with her husband, George—a pilot—and their 15-year-old twin daughters Shili and Heidi. Emmy’s mother, named Solange Shuster, was born in Poland in 1938, and escaped with her mother and cousin to France during WWII. At first, they hid out in the home of a French Christian family, and then later they were smuggled into the unoccupied area of France. They were among the few family members who were not murdered at the Auschwitz-Birkenau extermination camps.

Photo: The International Fellowship of Christians and Jews
Solange then continued her life in France, where she eventually met a man from the Ivory Coast called Triora. The two were married and moved back to the Ivory Coast in 1967, where their daughter Emmy was born and raised Jewish children. Amy then married a local man named George. During the country’s 2012 civil war, they moved with their daughters to France.

The Camara family arrving in Israel (Photo: The International Fellowship of Christians and Jews)
Emmy’s husband George also has an interesting story to tell. He leads a Jewish lifestyle and started a conversion process two years ago. Moreover, he discovered that he is a descendent of an African tribe that believes itself to have originated from the Tribe of Dan, with some of its members still conducting a traditionally Jewish lifestyle. “I am very excited to come to Israel. This for me is coming full circle,” said Emmy. “My mother and her family were persecuted by the Nazis. Later in life I, myself had to leave the Ivory coast and find shelter in France, and now finally I arrive with my family in Israel, where I’ll find shelter and a home as a Jew.” For George, there was no question about their family making aliyah. “As soon as I knew she was Jewish, my first reaction was to come and see Israel. Arriving here was the obvious choice. We’ve waited to be Israeli and closer to the Jewish public,” he said. The family plans on living in Ashkelon, and the girls on studying in the Ben Shemen Youth Village. The first goal is to "love Hebrew," said Emmy. “We love the Land of Israel and the Bible. If we don't know the language, though, something will be missing in any field, but especially in the professional field. So we’ll go to an ulpan and, God willing, we’ll find a job and become an active part of Israeli society.” The family arrived on special flights organized by the international Fellowship of Christians and Jews, together with others on their flight.