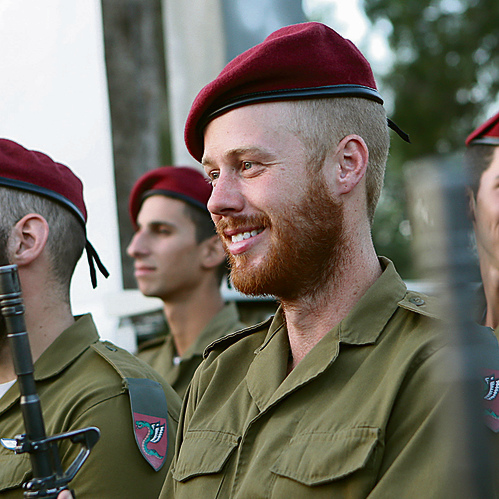 From Hollywood to the IDF

American actor Houston Mack decided to leave Hollywood and chase another dream of his and has now become a soldier in the IDF Paratroopers Brigade; ' I want a good future for our country. If I can contribute, it is my responsibility to do that.'

After acting in school plays at 10 years old, Houston Mack's career took off and landed him an agent, recurring roles in television series, and finally films such as You, Me and Dupree, Stop That Cycle and Latchkey.

During the summer of 2013, Mack's life changed and he decided to immigrate to Israel and began studying Hebrew at Kibbutz Yagur. In December 2015, Mack was drafted into the IDF and began his service at the Michve Alon training base before being drafted into the Paratroopers Brigade.

"I always dreamt of joining the army, not necessarily the IDF, but just being a soldier," said Mack. Mack's father served in the Marines, while one of his grandfathers was a pilot and the other a sniper both in the US Army. "I was exposed to the Paratroopers Brigade and I decided I want to join the IDF, the army of the Jewish people, my people."

For Mack, the journey is just beginning. "I want to advance here in the Paratroopers, to contribute to the country and the army and become an officer. I want a good future for our country. If I can contribute, it is my responsibility to do that."

Mack's parents at first did not understand his plans. They had never been to Israel and they thought it was a dangerous place. However, in time they understood and Mack's mother came to Israel for the first time after Mack finished his beret march and received the distinctive maroon beret of the Paratroopers.

Following his military service, Mack plans to contribute to Israeli society internationally. "My dream is to study film here in Israel and present Israel positively in world cinema."