Trump and Clinton. Not very different in the eyes of ISIS.
Photo: Reuters 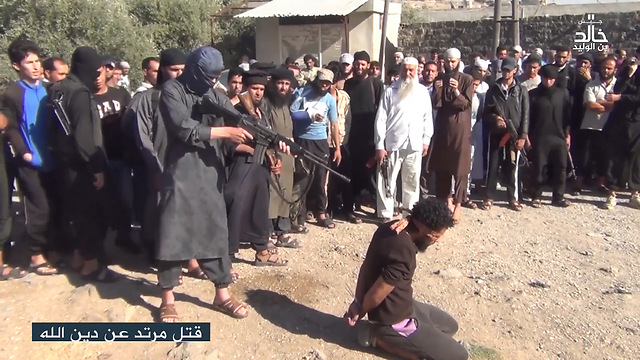 The Islamic State's communications department published an article calling for Muslims in the United States to boycott the upcoming presidential elections, and to perpetrate attacks against those who do vote.

The ISIS may be fighting to keep its grasp on the Iraqi city of Mosul, but its communications department is attempting to influence another front: The United States. The Islamist terrorist organization published on Friday a long article about Muslim participation in the US election, titled, "The Murtadd Vote" in its al-Hayat magazine

A "murtadd" is a Muslim apostate, a crime which is punishable by death.

“The Murtadd voters, however, did not learn, as by 2008, Obama got up to 90 percent of their vote. And after almost thirty years of history proving to the entire world that there is no difference between the American Republican and Democratic parties in their policies against Islam and Muslims, the murtadd imams of the so-called “Muslim Brotherhood” and its sinister sects continue to advocate voting in the pagan festivals of US democracy, this time campaigning for the Democratic Party and its presidential nominee, Hillary Clinton,” the ISIS piece rambled.

ISIs executing a man on the border with Israel
The piece continued, saying “they refuse to see that Obama interfered – both directly and indirectly – against the interests of Muslims just as Bush senior, Bill Clinton, and bush junior had done before him. Obama invaded Iraq and Sham, backed the Jewish state and Arab tyrants, interfered in Libya (fearing the arising and spread of Jihad, just as Clinton had done in the Balkans), continued Bush’s drone strikes and proxy wars in Yemen, Afghanistan, and Somalia, and preserved Guantanamo Bar, breaking almost every election promise he had made, something that both Donald Trump and Hillary Clinton would undoubtedly do just as their predecessors had done before them.”

“Trump is impulsive and unpredictable”

The article then went on to speak about the two candidates for president themselves, saying “Also, after both Trump and Clinton committed themselves to the Jewish state and the war against Islam (especially through their vows to continue the war against the body of Islam, the Khilafah), the only differences between Trump and Clinton are that Clinton is more skilled in “political correctness,” giving her leverage in the sorcery of hypocrisy, that she is a female feminist – and the Prophet said, “Never shall a people who give their leadership to a woman be successful” (Reported by al-Bukhari from Abu Bakrah) – and that Trump is impulsive and unpredictable.”

A US Air Force pilot prepares to go on a mission to bomb ISIS (Photo: Reuters)

The article continues, and gives its idea of what Islam has to say about the “ritual” of democracy. They explain that anyone who votes in democratic elections becomes a tyrant in and of themselves, as well as an enemy to god.

There is even a picture of Netanyahu with Democratic Vice Presidential Nominee Tim Kaine. ISIS described Kaine as “courting the Jewish tyrant” in the picture.

There is also a picture of Trump where he is, in the words of the ISIS publication, “courting Jews at the AIPAC convention.” There is another picture of a Muslim supporter of Hillary Clinton, a supporter who the terror group claimed is “murtadd.”

Quranic verses were quoted and interspersed throughout the article, all being used to support the claim that Muslims are not allowed to vote in democratic elections, especially in the US.

The article ends by saying that “Hence, as it is clear that the voter is a part of the taghut of democracy – “the power of the people” – and that the voters are directly involved in the decision making process by choosing delegates to represent them and their whims executively, judicially, and legislatively, the blood of Crusader voters is even more deserving of being spilled than the blood of Crusader combatants.”

Women aren’t absolved of their part in the massacre of Muslims either. As ISIS writes, “the same would apply to the blood of female voters, as they are no longer mere wives serving Crusader husbands and raising cross-worshiping children, rather female voters are part of the democratic taghut that decrees the crusades to be waged against Islam and the Muslims, and are thus just as actively responsible for the Muslim blood being spilled as the male, Crusader soldier on the frontlines.”

Meanwhile, US intelligence agencies warned that they’ve acquired information that al-Qaeda is planning to carry out a terror attack against polling stations in New York, Texas, and Virginia.