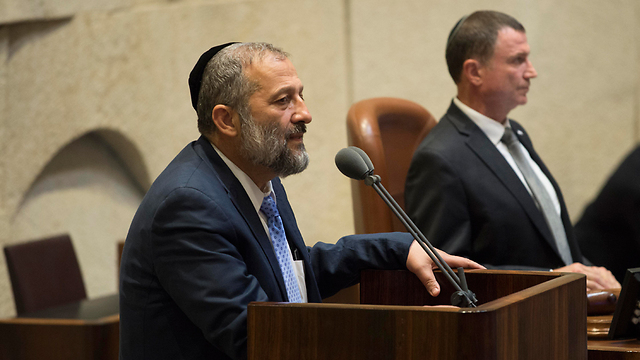 Deri against Reform Jews: ‘They cause the destruction of Judaism’

Minister of the Interior Aryeh Deri (Shas) rejects Reform Judaism’s claim to the Western Wall, saying, ‘“What do they have to do with the Kotel?’ and claiming its followers are ‘only looking to create provocation’; Reform leaders call his comments 'mean-spirited' and 'ignorant.'

Minister of the Interior, Minister of the Development of the Negev and Galilee and Shas Leader Aryeh Deri came out saying that non-Orthodox sectors of Judaism cause the “destruction of Judaism” and that he is willing to give up his religion rather than accept the liberal stance that Reform Judaism supposedly offers.

Deri made his statement during a questions and answers segment at the Knesset, pertaining to the current fight to have different sectors of Judaism pray at the Western Wall, including mixed-gender prayer. He was responding to a question raised by MK Elazar Stern (Yesh Atid), who wanted to know why Deri was not working to reach a resolution with the more progressive sectors wishing to pray at the wall.

Interior Minister Aryeh Deri (Photo: Yoav Dudkevitch)
“What do they have to do with the Kotel?” asked Deri. “They don’t believe in the Temple, they’re only looking to create provocation and a public rift.” Deri claimed that progressive synagogues in Israel remain empty of prayer, despite elaborate attempts to draw crowds. “On Yom Kippur they brought trampolines for the kids, as well as candy and juice stands,” said Deri. “One has guitar music and the other an organ. Is this the Judaism you’re looking to draw closer? If this is Judaism, I’d rather give it up. This isn’t a synagogue, but something else.” “The Judaism I know is the one that goes by Shulchan Aruch and maintains Jewish Law,” said Deri, referring to a 16th century compilation of Jewish law. “The Reform Jews may be our brethren, but they’re causing incredible damage. They are intentionally trying to destroy and demolish the original paths in all matters of Judaism.” The Knesset Internal Affairs and Environment Committee is slated to tour the site of the Western Wall on Wednesday, in an effort to settle the dispute. However, over the last couple of days, representatives of the ultra-Orthodox factions have announced one by one that they would be boycotting the tour over the participation of Reform Jews. The two chief rabbis of Israel—the Sephardi Yitzhak Yosef and Ashkenazi David Lau—have also insisted on being heard on the matter and have also announced they will be boycotting the tour. Reform Rabbi Gilad Kariv called Deri’s statement “an ugly and blunt attack,” adding, “ Deri and his friends’ baseless hatred causes them to routinely say slanderous statements. Instead of soul searching over how their conduct distances hundreds of thousands of Israelis from Jewish tradition, they attack those who are trying to fix the damage they are doing.” “We’re not looking for a kashrut (Jewish validation) certificate from Minister Deri,” added Kariv. “We demand the Jewish state honor the large sectors that exist within Judaism.” Masorti traditional Judaism organization Executive-Director Yizhar Hess also responded to Deri’s comments, saying, “Minister Deri’s words are a mix of ignorance and mean-spiritedness. It’s unbelievable that a minister in the Israeli government would allow himself to disparage millions of Jews across the world like this. We expect the prime minister to swiftly disavow Minister Deri’s comments.”